UP, UP AND AWAY

It's a bird! It's a plane! It's Jenna Dewan-Tatum hanging out with Superman on the set of Jimmy Kimmel Live on Monday in Los Angeles, where she talked about husband Channing Tatum's bromance with his 22 Jump Street costar Jonah Hill.

Maleficent costars Angelina Jolie and Elle Fanning stick with their go-to light and dark color scheme at a Tokyo press conference on Tuesday.

Caught ya off guard? Director and star Zach Braff has some photo booth fun with his wig-clad costars Joey King and Ashley Greene at the Los Angeles premiere of Wish I Was Here on Monday.

Jennifer Aniston and fiancé Justin Theroux make a rare red carpet appearance together – and look darn good doing it! – at the premiere of his new HBO series The Leftovers in New York City on Monday night.

Go team go! Although England is officially out of the World Cup, that doesn't stop Prince Harry from cheering: The royal takes in the action during Cameroon's 4-1 loss to Brazil on Monday in Brasilia, Brazil.

It's a parents' night out! Donald Faison strikes a pose with wife Cacee Cobb at the premiere of Wish I Was Here (he costars) in Los Angeles on Monday.

Is it hot in here or is it just him? Adam Levine is swoon-worthy in blue on Monday as heads into the Late Show with David Letterman in New York City.

Amy Poehler and Paul Rudd buddy up at the premiere of their new movie They Came Together Monday during BAMcinemaFest 2014 in N.Y.C.

Catch a wave, Lea! Michele gets ready to hit the surf at the Oakley Learn to Ride event in Cabo San Lucas, Mexico, on Monday.

Must be an inside joke! Liv Tyler shares a laugh with costar Amy Brenneman at the after-party celebration of their new HBO series The Leftovers at Tao Downtown Monday night in New York City.

Moses, is that you? Steven Tyler channels the ancients at a Stella McCartney party during Men's Fashion Week in Milan, Italy, on Monday.

Maria Sharapova shows her sweet side on Monday at the launch party for her new Sugarpova Pinkberry topping at Selfridges in London.

Matt Damon completes his gym ensemble with a baseball cap (and a winning smile!) after a Monday sweat session in West Hollywood.

Another day, another adorable N.Y.C. outing for Emma Stone and Andrew Garfield, who hit a bookstore together on Monday.

After the weekend's extravagant birthday celebration for daughter North, Kim Kardashian is back to business Monday in Beverly Hills.

Before getting in on the World Cup action, Prince Harry bonds with patients from a Brazilian rehabilitation hospital on a Monday canoe trip in the South American nation's federal capital, Brasilia.

Ian Somerhalder touches down in Washington, D.C., with a few stylish essentials on Monday.

LIVING IN THE PRESENT

Christmas in June? Tina Fey celebrates the holidays a bit early on the set of her new film The Nest Monday in Long Island, New York. 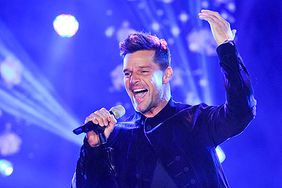