The How I Met Your Mother star introduces M&M's newest character in L.A. Plus: Michelle Williams, Ryan Reynolds, Miranda Kerr and more

A star is born! Neil Patrick Harris introduces Ms. Brown, MampM's newest eyeglass-wearing character, at The Grove in Los Angeles on Monday. Ms. Brown is set to appear in her first MampM's ad during the Super Bowl.

Funnyman Jim Carrey accessorizes his comfy robe with a few studded bangles and ear piercings on the L.A. set of his latest comedy The Incredible Burt Wonderstone on Monday.

Madonna, who admits she's about her upcoming Super Bowl performance, looks calm and collected Monday during a color-coordinated meet-and-greet with fellow songstress Jennifer Hudson backstage at The Tonight Show with Jay Leno in Burbank, Calif.

Fashionista Rachel Zoe holds tight to her little man, 10-month-old son Skyler, during a Monday afternoon out with friends in West Hollywood.

After supporting her sweetie in the hospital, a stylish Jordin Sparks steps out for a Monday appearance on NBC's Today show in N.Y.C.

Oscar nominee Michelle Williams has it made in shades Monday while arriving at New York's JFK International Airport.

Wearing a white bikini and aviators, Miranda Kerr puts her supermodel body on display Monday while unwinding in Sydney, Australia.

Well, hello! Reese Witherspoon turns heads on the red carpet in a sparkling detailed minidress while promoting her new action-comedy, This Means War, Monday in London.

LIFE IS A BEACH

Alicia Keys enjoys a seaside stroll with her adorable water baby, 15-month-old son Egypt, during a family vacation in Hawaii on Monday.

While Jennifer Lopez isn't ready to talk marriage, she happy to keep close company with new love Casper Smart as the pair step out in New York on Monday.

A white-hot Rooney Mara works the red carpet while arriving for the Tokyo premiere of The Girl With the Dragon Tattoo Monday in Japan.

She's a crowd pleaser! Kristen Stewart finds herself the center of attention Monday in Paris, where the actress reportedly shot a photo spread for Vanity Fair magazine.

Daniel Radcliffe gets his morning off to a raucous start with an appearance on Z100's Elvis Duran and the Morning Show Monday in New York City, where he promoted his upcoming flick The Woman in Black. 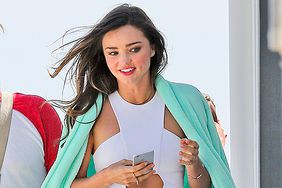