Michael Strahan strikes a pose at the launch of MSX by Michael Strahan for NFL, an exclusive limited-edition Super Bowl LIV capsule collection in celebration of the NFL's 100th season, on Monday in N.Y.C.

Eric Ripert takes a break from prepping dinner to pose with the VIPs - the appliances! - at an LG Signature-hosted event Friday at his N.Y.C. restaurant Le Bernardin.

America Ferrera, also at Sundance, stays bundled in her Sorel gear while out and about in Park City on Monday.

Similarly styled nominees Charlize Theron and Renée Zellweger get together at the 92nd Academy Awards Nominees Luncheon at the Loews Hotel in L.A. on Monday.

Also at the Oscars luncheon on Monday, Cynthia Erivo, who chats with Brad Pitt.

Hosts with the Most

Bill and Giuliana Rancic enjoy a moment together at the opening of their new RPM Seafood restaurant in Chicago, before heading to Dance Studio for the afterparty.

Dove Cameron puts in some time on Monday at the FEKKAI Turns the Tide Beach Hair Salon and Cleanup in Santa Monica, California.

Patrick Dempsy flashes a thumbs up while attending the world's most difficult ski race at the Hahnenkamm in Kitzbuehel, Austria, on Saturday.

Dolittle costars Robert Downey Jr. and Emma Thompson goof off at the London premiere of the film on Saturday.

Snoop Dogg performs in Detroit on Sunday in an L.A. Lakers sweatsuit in memory of the late Kobe Bryant.

Drew Barrymore and Minnie Mouse smile together in front of the iconic Cinderella castle on Saturday at the Magic Kingdom at Walt Disney World in Lake Buena Vista, Florida.

Will Ferrell and Julia Louis-Dreyfus kid around onstage on Sunday during the Downhill premiere at the 2020 Sundance Film Festival in Park City, Utah.

Pete Davidson and Josh Safdie share a laugh while sitting courtside during the Brooklyn Nets vs. New York Knicks game at Madison Square Garden on Sunday in N.Y.C.

James Marsden and son William Luca look giddy at the Sonic the Hedgehog Family Day Event on Saturday in Hollywood.

Ben Schwartz, who voices Sonic in the upcoming film, gets some face time with the guest of honor at the Sonic the Hedgehog Family Day Event.

Julia Garner and Kerry Washington exchange excited smiles after running into each other at TheWrap Studio sponsored by Heineken during the Sundance Film Festival in Park City, Utah, on Sunday.

Viggo Mortensen fuels up with a coffee at The Vulture Spot presented by Amazon Fire TV on Sunday in Park City, Utah.

Dave Grohl stops by The Nowhere Inn premiere party at the Sundance Film Festival in Park City, Utah, on Sunday.

Chicago Fire's Jesse Spencer plays a game of ping pong in the 'Paddle Battle' to benefit the 100 Club of Chicago at SPiN Chicago on Sunday.

JAY-Z and Beyoncé are all smiles at Clive Davis' pre-Grammy Gala, which honored Sean "Diddy" Combs, in Beverly Hills on Saturday night.

Cardi B and Offset show their affections on the red carpet at Clive Davis' pre-Grammy Gala, which honored Sean "Diddy" Combs, in Beverly Hills, on Saturday night.

Alexander Hodge, Yvonne Orji, Issa Rae, Prentice Penny, Elaine Welteroth and Jay Ellis have some fun at the Lowkey Insecure Dinner presented by Our Stories to Tell during the 2020 Sundance Film Festival in Park City, Utah, on Saturday.

Glenn Close and Mila Kunis pose together at WarnerMedia Lodge: Elevating Storytelling with AT&T during the 2020 Sundance Film Festival on Saturday in Park City, Utah.

P!nk attends the hit show ABSINTHE at Caesars Palace in Las Vegas on Saturday and goes backstage afterward to meet with The Gazillionaire and Green Fairy.

Ben Stiller and his son are joined by Timothée Chalamet at the Toronto Raptors vs. New York Knicks basketball game at Madison Square Garden in New York City on Friday.

Rachel Brosnahan visits the Adobe space at the IndieWire Studio during the 2020 Sundance Film Festival in Park City, Utah.

Olivia Wilde walks the red carpet at HP and The Lab at Anonymous Content for the premiere of her new short film Wake Up at the 2020 Sundance Film Festival in Park City, Utah, on Friday.

Kerry Washington has a ball on Friday at the 2020 Sundance Film Festival premiere of The Fight at The Marc Theatre in Park City, Utah, ahead of HBO's HERstory dinner. 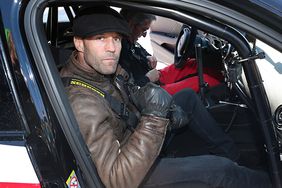