Taking a break from the winter chill, Nicole Richie and Joel Madden head to Hawaii for some fun in the sun on Monday.

With keys to her Bentley in hand, Kim Kardashian is ready to go after picking up some items Monday at the Burberry store in Beverly Hills.

After enjoying a lunch date in the park with 7-month-old daughter Honor Marie, Jessica Alba and husband Cash Warren step out for a snack Monday at Beverly Hills eatery Urth Caffé.

Dressed for success, President-elect Barack Obama keeps his eye on the prize Monday, warming up on the driving range during an afternoon on a private golf course in Kailua, Hawaii.

After partying in Aspen, Paris Hilton heads Down Under for some serious shopping on Monday at Melbourne's Wayne Cooper boutique, where she checked out all the angles on a flowing floral dress.

Owen Wilson goes barefoot in the park Monday, enjoying a wet and wild soccer game in the rain while on holiday in Hawaii.

Armed with a warm hat, a smiling Kate Hudson braves the snowy Aspen weather on Sunday, stepping out with a friend to do some after-Christmas shopping. Her new comedy, Bride Wars, hits theaters Jan. 9.

Sporting a groovy pair of bell-bottom jeans, Katie Homes shows her flair for fashion as she leaves a business meeting in Manhattan on Monday.

Did he score a New Year's Eve outfit? We'll have to wait and see as Kanye West keeps his designer threads safely sealed after shopping Saturday at the Chanel store in Los Angeles.

Another day, another trip to the farmer's market! Jennifer Garner balances daughter Violet, 3, on her ever-growing baby bump Sunday as the cheerful duo search for produce in Brentwood, Calif.

He huffs, and puffs – and blows out the candles! John Legend celebrates his 30th birthday Sunday night with a party at New York City's Lucky Strike bowling alley, where the singer was presented with a piano-shaped cake. 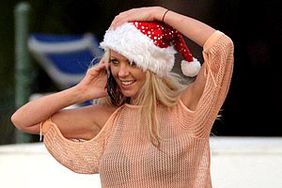 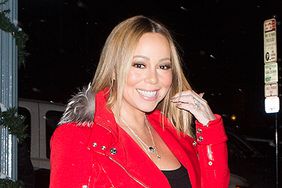