And he's off! Globetrotting soccer star David Beckham carries his bag on his back as he prepares for departure Monday at Los Angeles International Airport.

George Clooney arrives at his Up in the Air premiere at the Mann Village Theatre Monday in gorgeous company – with girlfriend Elisabetta Canalis and mom Nina on his arm. The comic drama will land in theaters Dec. 4.

Leaving the kids at home for the night, Brad Pitt and Angelina Jolie enjoy a dinner date Monday at La Dolce Vita restaurant in Beverly Hills. The pair reportedly joined pals – including George Clooney and Cindy Crawford – at the hot spot for the Up in the Air premiere afterparty.

Ashlee Simpson-Wentz is all jazzed up after making her Broadway debut as murderess Roxie Hart in Chicago Monday night at New York's Ambassador Theater. The singer had a starry cheering section in the audience, including hubby Pete and Jessica Simpson, who tweeted, "Watching her up on that grandiose stage made me the proudest sister in the world."

Justin Timberlake is bringing curly back! Sporting a full head of curls – like in his 'N Sync days – the singer prepares for work Monday on the Los Angeles set of The Social Network, where he'll play Facebook founding president Sean Parker.

Kourtney Kardashian – who will welcome a baby boy this month – stays hydrated while running errands Monday in Beverly Hills.

Kellan Lutz finds time for a little art appreciation, admiring the Audi-sponsored "Art of Progress" exhibition as part of Miami's Art Basel festival on Monday. But the New Moon hottie also took in the South Beach club scene, dancing the night away at Set Nightclub with some pals recently.

Looking chic in her Burberry leather jacket and distressed denim, Jennifer Aniston prepares for takeoff at London's Heathrow Airport on Monday. The actress made a stopover in the English capital after spending her Thanksgiving at a star-studded hotel opening in Morocco.

Paging Dr. Montgomery! Private Practice star Kate Walsh is ready to get back to work Monday as she heads to the set of her hit television show in Los Angeles.

Who can't keep a straight face? Shakira cracks up on Monday while participating in a news conference at the XIX Ibero American Summit in Estoril, Portugal. The Colombian singer spoke at the 22-country gathering to promote early infant development in South America.

Singing sensation Susan Boyle shows her actions sometimes speak louder than her golden pipes! The Britain's Got Talent star waves her native flag outside her home in Blackburn, Scotland, on Monday in celebration of St. Andrew's Day, the country's national day.

Can I get that for you? A dapper Ed Westwick opens doors on Monday while filming Gossip Girl at a restaurant in N.Y.C.

Game, set, match! Elijah Wood and Josh Duhamel hit the court for a friendly game of tennis while filming The Romantics in Queens, N.Y., on Monday.

All bundled up in a cozy sweater, a cheery Cameron Diaz waves to Spanish fans on Monday while making her way to the Seville set of Knight amp Day. The cast – which includes Tom Cruise – has made stops so far in Boston and Salzburg, Austria, to shoot the romantic comedy. 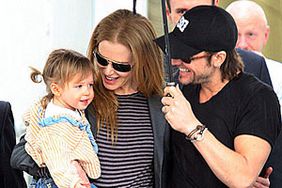