Colin Firth takes a stroll on Wednesday in London ahead of his 60th birthday.

Shay Mitchell steps out on Wednesday in high waisted mint shorts and a crop top while on set for a Revlon commercial in L.A.

Serena Williams celebrates after defeating Tsvetana Pironkova in the U.S. Open quarterfinals on Wednesday in N.Y.C.

Special Contributor Nancy O'Dell sits down for an exclusive interview with Garth Brooks and Trisha Yearwood in Nashville for the debut episode of PEOPLE (the TV Show!), which will air over two days on September 14 and 15.

Dennis Quaid poses with a rescue pup on Wednesday in Hollywood, while on set for Hallmark's Home & Family.

Matt Dillon walks the red carpet in Venice, Italy on Wednesday ahead of the Spy No Tsuma premiere at the Venice Film Festival.

Kaia Gerber and Jacob Elordi are seen leaving Dogpound Gym together on Wednesday in N.Y.C.

Kendall Jenner heads to lunch with Hailey Bieber on Wednesday afternoon in West Hollywood after finishing a morning workout.

Joel Kinnaman enjoys a surf session on Wednesday in Malibu.

Kaia Gerber is seen during her photoshoot for Coach on Tuesday in N.Y.C.

Jennifer Lopez and Alex Rodriguez head out from their dinner date in Tribeca, N.Y.C. on Tuesday night.

Hugh Jackman stays hydrated on his walk through N.Y.C. on Tuesday.

Elizabeth Olsen grabs a coffee from Alfred Coffee on Tuesday in L.A.

Justin Bieber and Hailey Baldwin make their way through Beverly Hills on Tuesday to grab lunch.

Nina Dobrev wears a Friends hoodie while out running errands on Tuesday morning in L.A. 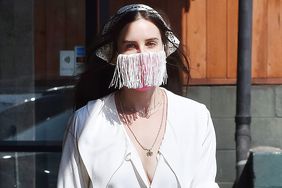