David Beckham tied one on – in a dapper vest and bow tie – at the Wednesday night opening of chef Gordon Ramsay's new restaurant in the London West Hollywood Hotel. "He's amazing. We go back a long way," the Kitchen Nightmares host tells PEOPLE of the soccer star. "Us Brits stick together"

Prince Harry handles a sweet baby girl with care during a visit Thursday to the University Hospital of Wales in Cardiff, Wales. The royal will soon be heading to the Kingdom of Lesotho in southern Africa with members of his army regiment.

Look who's a big kid now? Liv Tyler goes up, up and away with son Milo, 3, on the Frog Hopper during an afternoon playdate Wednesday at Santa Monica's Pacific Pier Amusement Park.

The Jonas Brothers – (from left) Nick, Joe and Kevin – look to be on a caffeine buzz as they hit the stage to open for fellow rocker Avril Lavigne Wednesday at London's O2 Arena.

They're fierce! Project Runway winner Christian Siriano and show mentor Tim Gunn make it work on stage at the Wednesday taping of Bravo's A-List Awards. The show, which honors the best in pop culture, fashion, beauty, food and design, is hosted by Kathy Griffin and will air June 12.

Mischa Barton makes a bright statement in her golden vest as she arrives at the Billabong 2nd Annual Design for Humanity Event at the Avalon in Hollywood on Wednesday.

After a jam session with Pete Wentz, John Mayer plays photographer Wednesday outside of his Pacific Palisades, Calif., home.

UP CLOSE AND PERSONAL

Tatum O'Neal – who is finding support in her three kids following her recent arrest – keeps her head held high Wednesday as she faces questions from reporters during a walk through New York's Lower East Side.

On- and off-screen couple Penn Badgley and Blake Lively use caution before crossing a New York City street Wednesday, after spending their afternoon strolling and shopping.

After sporting a plunging black dress earlier in the week, a leather-clad Halle Berry continues her dark streak Wednesday as she arrives for work in Los Angeles.

A beaming Madonna – whose adoption of David Banda was recently finalized – grins and bares those famous biceps Wednesday following a workout at her London gym.

Jay-Z – paying homage to the Presidential portraits that appear on American bills – gives a smile to fans waiting outside of New York hotspot Cipriani Tuesday night. 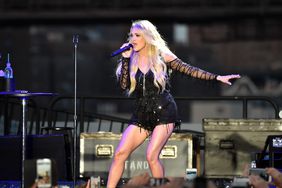