While rumors swirl that Naomi Watts is expecting a child with her beau Liev Schreiber, the Aussie actress stays bundled up during an errand run in New York on Wednesday.

Orlando Bloom hits the "green" carpet at the Global Green Pre-Oscar party at Hollywood's Avalon Wednesday night. The actor, who spent the evening chatting up Oscar nominee Penélope Cruz, told reporters about his green initiative: "My house in London, which I've been rebuilding, is completely green."

Tell us what you think about Orlando's new do on our Off the Rack blog.

The evening's host Jamie Foxx cracks up his Dreamgirls costar Jennifer Hudson at a Giant magazine party thrown in honor of the Oscar nominee in Beverly Hills on Wednesday. Hudson, the magazine's cover girl, confessed at the bash that she doesn't have a speech prepared for Sunday's award show: "I don't like anticipating anything...I just have to speak from my heart if I get that opportunity."

Katie Holmes and Rosario Dawson meet with Sierra Leone survivor Margaret Jayah at the V-Day and Glamour Magazine Present "Stories of Women in Conflict/Women Of Peace" event in Beverly Hills on Wednesday. The pre-Oscar event supports V-Day's global movement to end violence against women and girls.

Underneath those luxurious locks are Will Ferrell and Woody Harrelson, who go head-to-head (to discuss their new dos, perhaps?) on the Valencia, Calif., set of their 1970s-era sports comedy Semi-Pro on Wednesday.

Musical-theater buff Jennifer Garner is off to see the wizard at the opening night of Wicked in Los Angeles on Wednesday, where Halle Berry (not pictured) also enjoyed the show.

Can you say muy caliente? David Beckham is primed for action Tuesday as his team Real Madrid takes on Bayern Munich at Bernabéu Stadium in the Spanish capital. It was a good night for the soccer stud, who set up all three goals in Real Madrid's 3-2 victory over the German team.

There's no rest for this jet setter! After a whirlwind week in New York and Las Vegas, Eva Longoria gears up for a weekend of Oscar partying by hitting stylist Ken Paves's West Hollywood salon for a touch-up on Tuesday.

After hanging out with Owen Wilson over the weekend, a solo Kate Hudson shows off her bikini-ready body in the Australian surf on Wednesday.

A dapper George Clooney makes a well-suited appearance on the Greer, South Carolina, set of his new movie Leatherheads on Wednesday. The Oscar winner, who is due to head back to L.A. this weekend to present at the Academy Awards, directs and stars in the 1920s-era romantic comedy opposite Renée Zellweger.

Lt. Jim Dangle (aka Thomas Lennon) issues a cease and desist to VJ Damien Fahey during an appearance Wednesday on MTV's TRL to promote his new comedy Reno 911!: Miami.

Sporting two looks – prim-and-proper on top, sporty on the bottom – Gwen Stefani keeps a tight hold on son Kingston as the two leave London's West End on Tuesday. The Sweet Escape singer, who launches her U.S. tour in April, is rumored to make a guest appearance on American Idol in late March.

John Travolta revs up the promotional tour for his new road-trip movie Wild Hogs with a stop at ABC's Good Morning America on Wednesday. 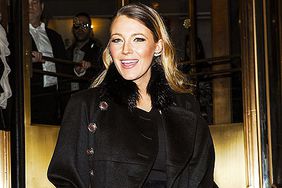