Jennifer Garner receives a blossoming bouquet Wednesday while on the set of her latest film, The Ghosts of Girlfriends Past, costarring Matthew McConaughey, while shooting in Massachusetts.

All eyes are on Lindsay Lohan at the Dolce amp Gabbana runway show Thursday as part of Milan Fashion Week. The actress – and budding model – has been indulging in her share of high-fashion poses lately, including a recent nude pictorial spread for New York magazine.

How's the view? Fergie makes sure not to miss any of the action on the runway at the D-Squared show Thursday as part of Italy's Milan Fashion Week.

An expecting Nicole Kidman continues her promotional tour of Tokyo, greeting fans at the Japanese premiere of The Golden Compass Thursday.

A glamorous Beyoncé raises the bar when it comes to her winter wardrobe – flashing an effortless smile after a meal with beau Jay-Z (not pictured) at Bar Pitti in New York's West Village on Wednesday.

Reese Witherspoon is no shrinking violet, beaming down the red carpet at the Los Angeles premiere of Penelope on Wednesday at the Director's Guild of America. And the actress has a lot to be proud of: She produced the Christina Ricci fantasy flick – and has a small role in it.

THE LADY IS A VAMP

Kylie Minogue dazzles in a vintage Vicky Tiel gown at London's Brit Awards on Wednesday, where the Aussie pop star was named best international female solo artist. "I've overcome. This is incredible," she said when accepting her trophy.

After celebrating her 20th birthday with rumored beau Chris Brown in Hollywood, Rihanna hops across the pond for a high-tech performance at the Brit Awards.

It's a race! Brad Pitt captures all the tubing action with son Pax, 4, at California's Mammoth

Mountain ski resort. The Jolie-Pitt clan hit the slopes together last weekend – though Brad and the boys did all the skiing, while Angelina and the girls

A bundled-up Matthew McConaughey stays warm – with a hot beverage in hand – on the chilly Massachusetts set of his latest movie, The Ghosts of Girlfriends Past, on Tuesday. The romantic comedy also costars Jennifer Garner.

David Beckham cools off with a dip in the Hawaiian surf Wednesday. The soccer star is in Honolulu for the Pan-Pacific Soccer Championship.

STEP UP 2 THE STREET

She's a dancing machine! Kate Hudson dresses down Tuesday for a class at a Pacific Palisades, Calif., dance studio.

Mandy Moore – who recently helped launch a female-empowerment Web site – charges on in Manhattan Tuesday on her way to dinner. 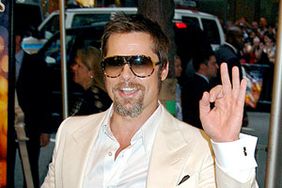