Wednesday in Las Vegas at the Sinatra 100: An All-Star Grammy Concert presented by The Recording Academy (airing Dec. 6 on CBS), Adam Levine photobombs John Legend and Chrissy Teigen with the help of wife Behati Prinsloo and pal Katharine McPhee.

Bill Murray ponders life on the red carpet for his Netflix holiday film, A Very Murray Christmas, in N.Y.C. on Wednesday.

Meanwhile, his co-star Miley Cyrus sinks her teeth into a sweater at the film's premiere on Wednesday.

Gwyneth Paltrow gets her sparkle on at the smartwater sparkling-sponsored opening of goop mrkt, her famed website's New York City holiday pop-up shop, in celebration of the brand's collaboration with Valentino on Wednesday.

TURNT UP FOR TALK SHOWS

Ben Affleck stops to take a photo with a fan on his way into the Jimmy Kimmel Live! studios on Wednesday in Los Angeles.

Emmy Rossum is spotted filming a wedding scene for her show Shameless on Wednesday in Los Angeles.

Follow the leader! Jason Derulo gets a group of patients at Children's Hospital Los Angeles on their feet on Wednesday, joining them in a round of the video game Just Dance 2016 during a visit to a movement therapy session.

Jada Pinkett Smith shows off her enviable figure (again!) while playing in the water on a Hawaiian beach.

And as usual, the woman of the hour, Helen Mirren, looks radiant in her floral dress and matching shoes.

THE FORCE IS STRONG

In a galaxy not so far away, Star Wars: The Force Awakens stars Daisy Ridley, John Boyega and Lupita Nyong'o get together at the Star Wars "Force 4 Fashion" event in New York City on Wednesday.

'SKYE' IS THE LIMIT

I WANNA HOLD YOUR HAND

Jaimie Alexander braves the crowds to watch the annual tree lighting at Rockefeller Center in New York City on Wednesday – and looks pretty chic doing so.

Everyone's favorite James Bond candidate, Idris Elba, is dapper as ever on the red carpet for a screening of Luther in N.Y.C. on Wednesday.

Looks like Karlie Kloss wants to take a bath in champagne – and we can't say we blame her! The model poses with a tub of bottles at the Raspoutine Paris pop-up in Miami on Wednesday.

Dancing with the Stars pros Maksim Chmerkovskiy and Peta Murgatroyd get cozy at the Samsung celebration for Alec Monopoly's LEVEL Headphones Collaboration in Miami Beach on Wednesday.

Food and fitness! After yoga class on Wednesday, bride- and groom-to-be Maggie Q and Dylan McDermott head for lunch in Los Angeles.

Hello, it's Rachel! McAdams hits the phones on CIBC Miracle Day in Toronto, Canada, to raise money for children in need on Wednesday.

Chris Hemsworth is at peace on the red carpet at the In the Heart of the Sea premiere in London on Wednesday.

A DRESS TO IMPRESS

Star Wars: The Force Awakens stars John Boyega and Daisy Ridley get a Stormtrooper escort on Wednesday during a visit to Good Morning America in New York City.

What makes Kanye smile? New York City! The rapper grins from ear to ear after landing at JFK airport on Wednesday. 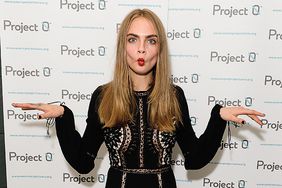 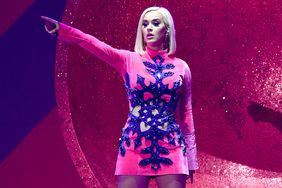 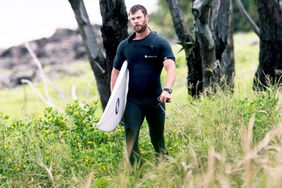 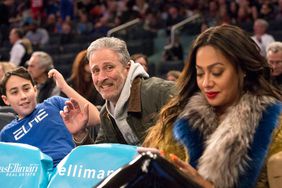 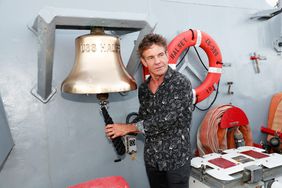 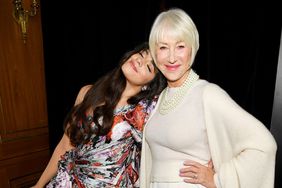 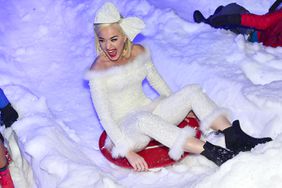 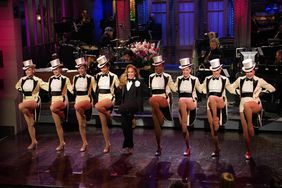