A dazzling Beyoncé adds a golden touch to her live show during the first U.S. stop of her "I Am ... Sasha Fierce" world tour (which kicked off on March 26) at the Key Arena in Seattle on Wednesday.

Jennifer Lopez and hubby Marc Anthony focus on fashion at a VIP dinner marking the opening of the first New York-based Topshop and Topman stores on Wednesday at Balthazar restaurant. "They really concentrate on making cool, really cutting edge clothes," Lopez told PEOPLE of the event.

There's a hot model on the move! Heidi Klum has jaws dropping as she steps out in a red scaled mini dress for a photo shoot on Rodeo Drive in Beverly Hills on Wednesday. The supermodel's design competition, Project Runway, just announced that it will return to TV this summer.

PORTRAIT OF AN ARTIST

Oops, that's not for snacking! Suri Cruise, who turns 3 on April 18, munches on a flip-flop as mom Katie Holmes carries her on Wednesday after reportedly visiting the American Girl doll store at The Grove shopping center in Los Angeles.

Time to fuel up! Taking a break from their Dancing with the Stars rehearsals, a shoeless Julianne Hough and boyfriend-partner Chuck Wicks head to lunch Wednesday in Los Angeles.

Victoria Beckham is the chicest mum in London! Posh takes sons Brooklyn, 10, and Cruz, 4, to cheer on their dad at Wembley Stadium Wednesday as his Team England faced off against Team Ukraine – and won 2-1.

Armed with a copy of The Los Angeles Times – and his cute pooch, BJ! – Matthew McConaughey runs some errands in the Malibu sunshine Wednesday.

Jessica Alba gets her feet sandy during a playdate Wednesday with nearly 10-month-old daughter Honor Marie at one of their favorite spots, Beverly Hills' Coldwater Canyon Park.

He'll have a water – straight up! A smiling Guy Ritchie makes the rounds Wednesday at a bash to celebrate author Charlie Brooks's new book Citizen, a thriller set in the world of horse-racing, at the members-only club Tramp in London.

A casually dressed Christian Bale stays connected with wife Sibi after lunching Tuesday at Italian eatery Sor Tino in Brentwood, Calif. Michael Caine, the actor's Dark Knight costar, recently commented on Bale's profanity-laced tirade on the Terminator: Salvation set, saying it was "completely out of character" for the star.

Vanessa Minnillo works with the wind Wednesday as she and suited-up boyfriend Nick Lachey make their way around New York City. 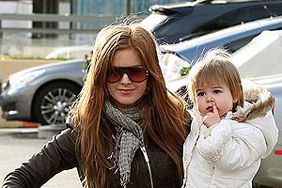