BEAUTY IN A BOTTLE

After a brief trip to Las Vegas earlier in the week, Britney Spears is back on the scene in Los Angeles, capping off a beauty spree at L'Occitane with yet another topper.

Back from their steamy Vegas trip, Ashlee Simpson and Fall Out Boy bassist Pete Wentz continue sticking together during a shopping excursion Wednesday at Barneys New York in Beverly Hills.

Fear not: Courteney Cox Arquette finds comfort in husband David Arquette's arms Wednesday at the premiere of his horror movie The Tripper at the Hollywood Forever Cemetery. While the theme was fright night, Arquette told PEOPLE that when it comes to his marriage, "If there's one thing about our relationship, there are no surprises."

She's some Friend! Jennifer Aniston will even walk among the dead at the Hollywood Forever Cemetery to support her pals, the Arquettes, at the premiere of their film The Tripper on Wednesday.

Can you guess the outcome of this battle? Fitness buff Matthew McConaughey sets his sights on conquering a new workout – the elliptical – in Malibu on Wednesday.

STAND BY HER MAN

Despite rumors of a breakup, Jessica Alba and boyfriend Cash Warren make it a cozy twosome for lunch at Beverly Hills eatery Orso on Wednesday.

Decked out in a cheongsam, HampM's latest celebrity collaborator Kylie Minogue makes a fashionable case for why she's the perfect style ambassador to help open the Swedish retailer's first Chinese store in Shanghai on Wednesday.

Nearly a month after giving birth to son Liam, Tori Spelling is already shaping up during a jog through Beverly Hills with husband Dean McDermott on Tuesday.

As the newest celebrity spokesmodel for CoverGirl, Drew Barrymore (in Carolina Herrera) already radiates easy, breezy, beautiful (the company's slogan) during a press announcement Wednesday at the Four Seasons in Beverly Hills. The actress told the AP of becoming the line's newest face, "What girl doesn't fantasize about it?"

Joel Madden plays gentleman escort to girlfriend Nicole Richie, picking her up from a Beverly Hills salon on Tuesday. The rocker recently told PEOPLE that his relationship with Richie is going well: "I am really happy and everything's really good for me right now."

Why buy retail when street chic will do? Debra Messing gets hung up on some jewelry while strolling through New York's SoHo neighborhood on Tuesday.

Courteney Cox Arquette heads to West Hollywood Italian restaurant Il Sole on Tuesday, where the Dirt star met up with Tobey Maguire's fiancée Jennifer Meyer and another pal for dinner.

After a recent face lift, Gene Simmons shows off his brand-new look during an appearance Wednesday on the CBS Early Show. But looks can be deceiving: The KISS singer wasn't performing – he was just modeling his moves with Guitar Hero 2, an interactive game for Xbox 360. 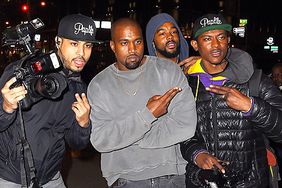