Kylie Jenner stepped out in an ab-baring ensemble for an outing in Beverly Hills, California.

Blue Is Her Color

Rihanna looked chic while leaving a late-night dinner with her loved ones at Giorgio Baldi in Santa Monica, California.

America's Got Talent's Heidi Klum and Sofía Vergara were spotted filming a commercial in Pasadena, California.

Justin Theroux stepped out for AppleTV's special drive-in screening of his new drama series The Mosquito Coast in New York.

Helen Mirren shoots a scene for her upcoming film White Bird: A Wonder Story in Prague in April.

Nora Lum and Bowen Yang film Nora From Queens on Thursday in N.Y.C.

Tom Cruise films with Esai Morales on top of a train for Mission: Impossible 7 on Friday in North Yorkshire.

John Cena is spotted in costume on the set of HBO's The Peacemaker on Thursday in Vancouver.

Anthony Anderson gets fired up at the EON Mist Sanitizer Pre-Oscars Lounge presented by GBK Brand Bar at La Peer Hotel in L.A. on Thursday.

Olivia Munn — who has been outspoken on recent attacks against the Asian community — sports an 'Everybody vs. Racism' bag while out in Los Angeles on Thursday.

Days after the death of his mother, Mark Wahlberg gets to work on the Los Angeles set of Stu on Thursday.

Jessica Alba keeps it moving while leaving an office in L.A. on Thursday.

Harvey Guillen gets into character on Thursday on the Toronto set of What We Do In The Shadows season 3.

Director Emerald Fennell gets all dressed up at home for Thursday night's Film Independent Spirit Awards.

Kaia Gerber wears khakis and a blue coat while out in West Hollywood on Thursday.

Gabrielle Union is spotted wearing a fake baby bump while filming the remake of Cheaper by the Dozen on Wednesday in L.A.

Kylie Jenner stuns in a yellow dress and white boots as she arrives at Nobu for dinner in West Hollywood on Thursday.

Joe Jonas and Sophie Turner stop by Kith Los Angeles for a quick shop on Wednesday in L.A.

Regina King shows off her street style in a tan jumpsuit and gingham face mask as she heads to dinner with friends at Craig's in West Hollywood on Wednesday.

Channing Tatum works up a sweat doing lunges on Wednesday in Santa Monica.

Keanu Reeves is seen on Thursday in Berlin, where he's filming the fourth installment of the John Wick franchise.

Host Melissa Villaseñor strikes a pose at the 2021 Film Independent Spirit Awards at Post 43 in L.A. on Wednesday.

Ryan Reynolds soaks up some sunshine while walking around N.Y.C.'s Tribeca neighborhood on Wednesday.

Miles Teller carries his clubs as he heads to the golf course on Tuesday in L.A.

Eddie Redmayne enjoys a cup of coffee during his day off from filming The Good Nurse on Wednesday in N.Y.C.

Justin Theroux takes his pup Kuma out for a walk to enjoy the spring weather on Wednesday in N.Y.C.

Keke Palmer grabs some coffee in Brooklyn, New York, on Wednesday while wearing her fokk sugar sweatshirt by siggi's yogurt.

Joel Kinnaman and fiancé Kelly Gale take their rescue dog Zoe for a walk after dinner at Taverna Tony's in Malibu on Wednesday.

James Marsden and Tika Sumpter film an action scene for Sonic the Hedgehog 2 in British Columbia, Canada, on Tuesday.

Man Behind the Mask

Tom Cruise waves as he heads to the set of Mission: Impossible 7 in Pickering, England, on Wednesday.

Jennifer Lawrence gets all dressed up for a day of errands in N.Y.C. on Tuesday.

Mariska Hargitay braces herself against a wind gust on the set of Law & Order: SVU on Tuesday in New York City.

Chris Pratt keeps it moving on Tuesday on the Los Angeles set of his new project, The Terminal List.

Christal Young and Carson Kressley goof off on the red carpet as Rebelle celebrates the 50th anniversary of 420 and the legalization of marijuana at Ten Hope in New York City on Tuesday.

Madonna sports a blue three-piece suit while out after dinner at Craig's in West Hollywood on Tuesday.

Emily Ratajkowski takes her dog out for a walk through N.Y.C. on Tuesday.

Melissa Benoist smiles in full costume while prepping to film Supergirl in Vancouver on Monday.

Sisi Stringer poses at the Sydney premiere of Mortal Kombat at Hoyts Entertainment Quarter on Tuesday.

Padma Lakshmi is seen returning home after a night out in N.Y.C. on Monday night.

Anne Hathaway carries luggage to her car as husband Adam Shulman waits to driver her on Sunday in N.Y.C.

Rihanna steps out in a silk robe on her way to dinner at Wally's in Beverly Hills late Monday night.

Dua Lipa leaves BBC Radio One after her Live Lounge performance on Monday in London.

Annie Murphy and Natasha Lyonne are seen on the set of Russian Doll on Monday in N.Y.C.

Brooke Shields and husband Chris Henchy are spotted out and about after grabbing lunch together in N.Y.C. on Sunday.

Kaia Gerber and boyfriend Jacob Elordi hold hands on a grocery run on Sunday in L.A.

America's Got Talent judge Howie Mandel playfully arrives on set shirtless and carrying a surfboard in Pasadena, California on Tuesday.

Kumail Nanjiani looks ripped as he leaves the gym after a workout on Friday in L.A.

Leslie Jordan takes the stage at the 56th Academy of Country Music Awards at the Grand Ole Opry on Sunday in Nashville.

Emily Blunt guest stars on The Jonathan Ross Show on Saturday in London.

Benedict Cumberbatch enjoys a bottle of cider on Burrow Hill in Somerset after the final day of filming Doctor Strange on Saturday.

Margot Robbie rollerblades with friends in Malibu on Sunday.

Ben Kingsley is seen for the first time as Salvador Dali on the set of Dali Land on Friday in Anglesey, Wales.

Harrison Ford was spotted enjoying a workout during a bike ride with a friend in Santa Monica, California.

Jessica Chastain was seen in costume on the Stamford, Connecticut, set of The Good Nurse in which she plays Amy Loughner.

Miranda Lambert was spotted rehearsing at the Ryman Auditorium in Nashville for the 56th Academy of Country Music Awards.

Rihanna stepped out for dinner with her family at Giorgio Baldi in Santa Monica, California.

Taylor Swift posed with her Number 1 Album Award for Fearless (Taylor's Version) as she claimed the top spot on the U.K. singles chart.

Heidi Klum arrives at the America's Got Talent set in Pasadena on Friday.

Alison Brie plants a tree as part of the Planet Oat Project to support reforestation in honor of Earth Day in Malibu.

George Clooney leaves his trailer with his beloved golden retriever on the last day of filming for The Tender Bar on Friday in Braintree, Massachusetts.

Scout Willis takes her pup along for errands on Thursday in L.A.

Gabrielle Union carries a water jug as she leaves the set of Cheaper by the Dozen on Thursday in L.A.

Jon Bon Jovi and his wife, Dorothea, step out to pick up some takeout in N.Y.C. on Wednesday.

Olivia Munn steps out in a casual outfit on Thursday in L.A.

Olivia Culpo smiles as she steps out for drinks in L.A. looking ready for warmer weather on Thursday.

Juanes and Karol G step out onto the red carpet for the Latin American Music Awards on Thursday in Sunrise, Florida.

Drake leaves the studio with security and friends in West Hollywood on Thursday.

Miles Teller drives away in his blue Ford Bronco after a workout on Thursday in L.A.

Demi Moore leaves her pilates class in a black mask and matching sweater on Wednesday in L.A.

Rachel Brosnahan heads to The Marvelous Mrs. Maisel set underneath an umbrella on Thursday in N.Y.C.

Carrie Underwood rehearses for the 2021 Latin American Music Awards at the BB&T Center on Wednesday in Sunrise, Florida.

Adam Driver rides a bike while filming The Gucci House on Thursday in Rome.

Nick Jonas enjoys a cigar while out playing golf with a friend on Tuesday in Surrey, England.

Miley Cyrus sips on wine after a photoshoot in Burbank on Wednesday.

Anya Taylor-Joy films a Tiffany & Co. commercial under the Manhattan Bridge on Wednesday in N.Y.C.

Ben Affleck is seen filming for The Tender Bar on Wednesday in Ipswich, Massachusetts.

Chris Pratt arrives on the set of The Terminal List on Wednesday in L.A.

Jessie J wears a one-shoulder top and sneakers on her way to a vegan cafe to meet a friend for lunch in L.A. on Tuesday.

Harrison Ford and Calista Flockhart leave their private jet with their dogs as they head into L.A. on Tuesday.

Carly Pearce takes the spotlight at the 56th Academy of Country Music Awards' virtual radio row at the Gaylord Opryland Hotel on Wednesday in Nashville. 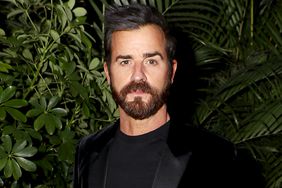 Justin Theroux Enjoys a Screening of His New Show in N.Y.C., Plus Hailey Baldwin, Tamera Mowry and More 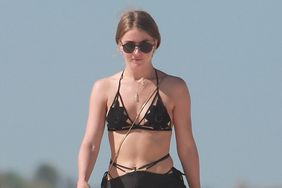 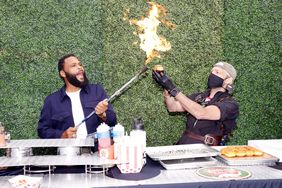 Anthony Anderson Is on Fire in L.A., Plus Olivia Munn, Mark Wahlberg and More 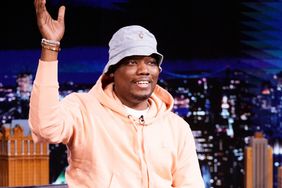 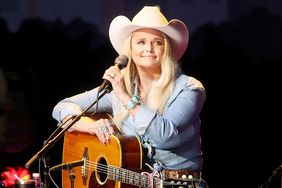 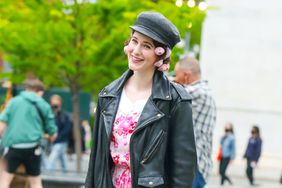 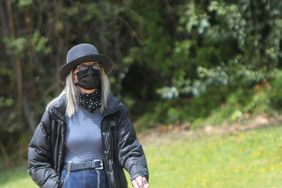 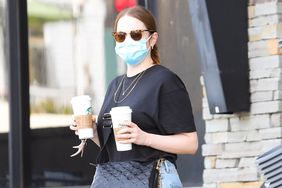 Emma Stone Goes on a Coffee Run in L.A., Plus Nicky and Kathy Hilton, Rachel Brosnahan and More 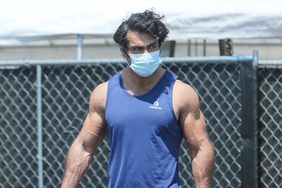 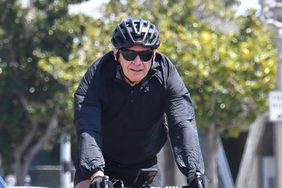 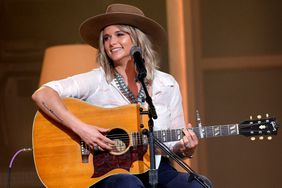