Vanessa Hudgens kicks off Halloween season early with a visit to Knott's Scary Farm on Sept. 17.

Penélope Cruz presents Marion Cotillard with the Donostia Award during the opening gala of San Sebastian Film Festival in Spain on Sept. 17.

Bells of the Ball

Christine Chiu and Billy Porter share a special moment on the red carpet at the Elizabeth Taylor Ball to End AIDS in West Hollywood on Sept. 17.

Pretty as a Picture

Penélope Cruz is every bit the movie star on Sept. 17 while arriving at the 69th San Sebastian International Film Festival in Spain.

Sarah Jessica Parker travels in style on Sept. 17 on the New York City set of And Just Like That ...

Gaia Wise and Emma Thompson embrace on Sept. 17 at The Icon Ball to raise funds for NHS Charities Together and Well Child at the Landmark Hotel in London.

Pedro Pascal and a pal take a walk around New York City on Sept. 17.

Only Have Eyes for You

Niecy Nash and wife Jessica Betts are one cute, coordinated couple on Sept. 16 at the Marcell Von Berlin runway show in Los Angeles.

Brooklyn Nine-Nine's Dan Goor, Joe Lo Truglio and Melissa Fumero share a moment while saying goodbye to their series on Sept. 16 during an interview on Late Night with Seth Meyers in N.Y.C. following the show's finale.

Marion Cotillard flashes a smile on Sept. 17 as she arrives to her hotel during the 69th San Sebastian International Film Festival in Spain.

Lily-Rose Depp and Camille Griffin keep close at the Silent Night premiere during the Toronto International Film Festival on Sept. 16.

Lila Moss (daughter of Kate) signs by the X on Sept. 16 while hosting a Miu Miu event in London.

Naomi Campbell and Kehlani get together on Sept. 16 at the London Fashion Week opening night party at The Windmill.

Justin Theroux gets serious on Sept. 16 at the rag & bone Deli Pop-Up Party co-hosted with his bar Ray's in Brooklyn, New York.

Pete Davidson takes a walk through N.Y.C. with a smile, repping his home borough on Sept. 14.

Machine Gun Kelly and Megan Fox head out in N.Y.C. on Sept. 15 following his sold-out show.

Jessica Chastain heads to The Late Show with Stephen Colbert in midtown N.Y.C. on Sept. 15.

Timothée Chalamet and Larry David enjoy a bite to eat at Sant Ambroeus in N.Y.C. on Sept. 14.

Pedal to the Metal

Kim Kardashian stops by The Ellen DeGeneres Show in Burbank, California, on Sept. 15.

Tom Felton snaps a photo during the Montblanc UltraBlack launch event at Feuerle Collection on Sept. 15 in Berlin.

Howie Mandel and Dustin Tavella attend the America's Got Talent season 16 finale at Dolby Theatre on Sept. 15 in Hollywood.

Selling Sunset's Christine Quinn goes glam on the Upper East Side during a shoot on Sept. 14 in N.Y.C.

Gabrielle Union looks radiant in a brown leather outfit while returning to her hotel in N.Y.C. on Sept. 15.

Channing Tatum wears a casual outfit while out in N.Y.C. on Sept. 14.

Regina King waves as she leaves her hotel in N.Y.C. on Sept. 15.

Jessica Chastain poses with drag artists at the Sept. 14 premiere of The Eyes of Tammy Faye in N.Y.C., where Casamigos cocktails were served.

Lin-Manuel Miranda makes a surprise appearance to welcome the audience back to Broadway on the re-opening night of Hamilton on Sept. 14 in N.Y.C.

Justin Bieber and wife Hailey Baldwin arrive at the Justin Bieber: Our World premiere at Edge at Hudson Yards on Sept. 14 in N.Y.C.

Moore on the Mic

Ben Platt, Julianne Moore and Amandla Stenberg take the stage during a special screening of Dear Evan Hansen on Sept. 14 in N.Y.C.

Marlee Matlin holds up a sign with her name on it at the Film Independent Special Screening of CODA at Harmony Gold on Sept. 14 in L.A.

Hailee Steinfeld walks arm-in-arm with her grandmother after grabbing dinner together at Carbone in N.Y.C. on Sept. 14.

Rina Sawayama and Lianne La Havas pose together at the Royal Academy of Arts Summer Exhibition 2021 Preview Party on Sept. 14 in London.

Kendall Jenner steps out in chic neutrals for The Tonight Show Starring Jimmy Fallon on Sept. 14 in N.Y.C.

Tom Hardy and his dog Blue attend the fan screening of Venom: Let There Be Carnage at Cineworld Leicester Square on Sept. 14 in London.

Lil Nas X and The Kid LAROI visit the SiriusXM Studios on Sept. 14 in N.Y.C.

David Beckham and mom Sandra Beckham attend the Sun's Who Cares Wins Awards at The Roundhouse on Sept. 14 in London.

Ava Max puts on a show at Fenway Park in Boston on Sept. 12.

Simu Liu arrives at the 2021 Met Gala, Celebrating in America: A Lexicon of Fashion, at the Metropolitan Museum of Art on Sept. 13 in N.Y.C.

Rita Ora, Jimmy Fallon and Taika Waititi bring the drama to the 2021 Met Gala, Celebrating in America: A Lexicon of Fashion, at the Metropolitan Museum of Art on Sept. 13 in N.Y.C.

Reba McEntire rocks a new look on Sept. 13 during Loretta Lynn's Friends: Hometown Rising, held at Nashville's Grand Ole Opry. All proceeds from the charity concert benefit the United Way of Humphreys County to help those affected by the historic flooding in the area last month.

The Band Camino rocks out at their secret show at New York City's Bowery Ballroom on Sept. 13. The band released their debut album, featuring "Underneath My Skin," last week.

Gladys Knight performs the national anthem ahead of the Baltimore Ravens vs. Las Vegas Raiders game at Allegiant Stadium on Sept. 13 in Las Vegas.

Jennifer Aniston is spotted outside of Jimmy Kimmel Live! on Sept. 13 in L.A.

Mark Oxtoby and Christopher Lloyd embrace after the curtain call during opening night of Back to the Future: The Musical at The Adelphi Theatre on Sept. 13 in London.

Mel C is in great spirits as she heads out to meet fans on Sept. 13 in Los Angeles.

Max Greenfield poses at the MPTF NextGen 2021 summer party on Sept. 12 at the Sunset Tower Hotel in L.A.

Ben Foster and Laura Prepon attend the world premiere of The Survivor at the Toronto International Film Festival on Sept. 13.

Kelly Rizzo and Bob Saget attend the I Love Us premiere afterparty at the Highlight Room in L.A. on Sept. 13.

Kristen Stewart and girlfriend Dylan Meyer go on an iced coffee run while out in N.Y.C.'s Union Square on Sept. 11.

Zoë Saldana and husband Marco Perego cozy up at the Formula One Italian Grand Prix in Monza, Italy, on Sept. 12.

Jennifer Hudson poses next to her wax figure during the unveiling of her Madame Tussauds wax figure at SUMMIT One Vanderbilt on Sept. 12 in N.Y.C.

Brad Pitt (next to Bradley Cooper) attends the men's singles final at the 2021 U.S. Open inside Arthur Ashe Stadium at the Billie Jean King Tennis Center in Flushing, New York, on Sept. 12.

Back in the Big Apple

Sarah Paulson and Holland Taylor walk around N.Y.C. on Sept. 12 after having lunch at Bergdorf Goodman.

Penélope Cruz and Javier Bardem cruise around during a taxi boat tour in Venice, Italy, on Sept. 11.

Paul Scheer and June Diane Raphael hit the stage during night one of the Television Academy's 2021 Creative Arts Emmy Awards at L.A. LIVE on Sept. 11.

Christina Aguilera channels the Statue of Liberty while performing at the LadyLand Festival in Brooklyn, New York, on Sept. 11.

Iman poses at Experience the Times of Bill Cunningham's opening night on Sept. 11 in N.Y.C.

Megan Fox turns heads in a sultry, all-black ensemble on her way to a fitting in New York City on Sept. 11.

Guy Fieri proves he's the mayor of Flavortown at the Food & Wine Classic in Aspen, Colorado, on Sept. 11.

Eva Longoria pours a shot of her Casa Del Sol tequila at the Food & Wine Classic in Aspen on Sept. 12.

Camila Cabello rides down the N.Y.C. streets in a bright pink sports bra and matching bike shorts on Sept. 11.

Saweetie celebrates at the Boom Boom Room in N.Y.C. on Sept. 12 after being named MAC Cosmetics' newest Global Brand Ambassador.

Adam Brody and Leighton Meester hand out produce, beans, rice and other essential items while volunteering with Feeding America for a day of giving back at the Los Angeles Regional Food Bank on Sept. 10.

Kid Cudi and Rosario Dawson are all smiles during New York Fashion Week while attending the Studio 189 presentation on Sept. 11 in N.Y.C.

Phoebe Bridgers performs onstage at the Pitchfork Music Festival in Chicago on Sept. 10.

Jodie Comer attends the red carpet premiere of the movie The Last Duel during the 78th Venice International Film Festival on Sept. 10 in Italy.

Sanda Oh sprints down the street while filming a scene for Killing Eve on Sept. 8 in Kent, England.

Troye Sivan makes his return to live performances during the MTV & EXTRA GUM Present: PUSH to the VMAs concert on Sept. 9 at Terminal 5 in New York City. The star sang his new single "Angel Baby" for the first time; artists Tate McRae and EBEN also took the stage.

Spike Lee holds up his award at the 46th Chaplin Award Gala honoring his career and legacy on Sept. 9 in N.Y.C.

Can't Rain on Her Parade

Megan Fox arrives in a baby blue ensemble for the Moschino Spring/Summer 2022 fashion show on Sept. 9 in N.Y.C.

Ben Affleck, Jodie Comer and Matt Damon keep the laughs coming while arriving at the Venice International Film Festival on Sept. 10 in Italy.

Luke Bryan poses with a statue of himself made entirely of Farmland bacon at his Farm Tour 2021 stop in Marshall, Wisconsin, on Sept. 6.

Julianne Moore and Ben Platt pose together at the Dear Evan Hansen premiere at the 2021 Toronto International Film Festival on Sept. 9. 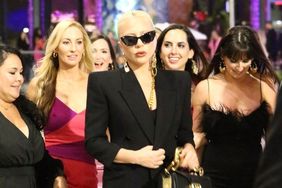 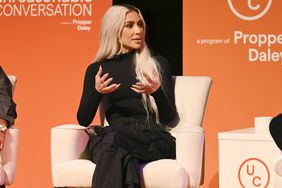