Riverdale star Lili Reinhart was spotted out in Los Angeles, wearing a mask and gloves for her outing.

Hilary Duff and her husband Matthew Koma were spotted shopping at Erewhon Market in Calabasas, California.

Natalie Dormer and David Oakes were seen waiting in line for coffee in London.

Ryan Phillippe was spotted out for a jog in Los Angeles.

Fall Out Boy rocker Pete Wentz was seen talking to a friend outdoors in Los Angeles.

Josh Dallas takes his bike for a solo spin in Los Angeles on Friday.

Gal Gadot steps outside her L.A. home on Thursday, greeting friends who passed by for her 35th birthday.

Kristen Wiig puts on a face mask before heading to shop at Erewhon supermarket in Calabasas, California, on Thursday.

Sebastian Stan goes for a walk in a blue hoodie and matching gloves in N.Y.C.'s SoHo neighborhood on Wednesday.

Emily Ratajkowski keeps it moving with her dog Colombo in L.A. on Friday.

Hilary Duff shows off her blue hair as she steps out in Studio City, California, on Thursday to go grocery shopping at Trader Joe's.

Model Devon Windsor and husband Johnny Barbara take a stroll in their Miami neighborhood on Friday. 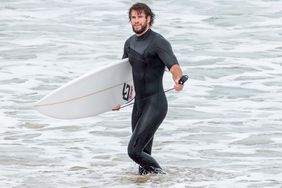