Kevin Bacon discusses his new comedy series, I Love Dick, on Monday at an AOL Build session in N.Y.C.

Jeremy Piven gets some shopping done in New York City on Monday.

Wearing a pair of oversized sunglasses, Blac Chyna makes her way through LAX Airport on Sunday.

Dear Evan Hansen's Ben Platt suits up for Sunday's Lucille Lortle Awards, where he took home a trophy for his performance in the Broadway musical.

Yes she is! Orange Is the New Black's Danielle Brooks gets excited as she strikes a pose with Dear White People's Ashley Blaine Featherson at the Netflix FYSEE Kick-Off Event on Sunday.

Grey's Anatomy star Jesse Williams gets an earful while out and about in New York City.

TOP OF THE CROP

Geena Davis takes a selfie with Terry Crews at Sunday's A League of Their Own 25th anniversary game at the Bentonville Film Festival in Arkansas.

Eric Johnson and Jessica Simpson bring kids Ace, 3, and Maxwell, 5, to a spring style event for The Boys and Girls Club of Waco, Texas on Saturday.

There he is! Michael Fassbender attends a photocall for his upcoming film, Alien: Covenant, in Madrid, Spain on Monday.

On Sunday, Prince Harry participates in the Audi Polo Challenge in Ascot, England.

Al Gore (left) and Joseph Gordon-Levitt attend the Fandango advanced screening of An Inconvenient Sequel: Truth to Power presented by Paramount Pictures and Participant Media in Los Angeles on Saturday.

Jason Moma hopped on his bike while out and about in Gold Coast, Australia, on Saturday.

Jamie-Lynn Sigler wipes away a tear after being honored at the Race to Erase MS Gala in Los Angeles on Friday.

Chance the Rapper performs during JMBLYA at Fair Park in Dallas on Friday.

On Friday, Natalie Portman is seen in full costume on the London set of her new film, The Death and Life of John F. Donovan.

On Friday in N.Y.C., Halsey strikes a pose while visiting Music Choice.

Edgar Ramírez, the actor playing Gianni Versace in the latest installment of American Crime Story, is seen arriving to set at the Versace Mansion in Miami Beach, Florida.

Alessandra Mastronardi and Aziz Ansari — who star in season 2 of Netflix's Master of None — attend the show's London premiere on Friday.

On Friday, Amber Tamblyn discusses her Off-Broadway debut in Can You Forgive Her? at AOL Build.

Alexander Skarsgard goes out for a walk around N.Y.C.'s SoHo neighborhood.

HAND IT TO HIM

Also appearing on Tonight: Halsey, who delivers a memorable performance on Thursday.

Jamie Chung and her furry friend, Ewok, enjoy a sunny walk in L.A. on Thursday.

A fresh-faced Jennifer Morrison attends The Cinema Society-hosted screening of Paris Can Wait on Thursday in New York City.

Josh Duhamel feels the music as he — and a mariachi band — kicks off Cinco de Mayo with Corona on Thursday in N.Y.C.

Spotted: Jenna Dewan Tatum totes a bottle of Fiji Water during a hike in L.A. on Thursday.

Mariah Carey is radiant in a white minidress while attending a birthday celebration on Thursday.

Katy Perry takes center stage during a performance at YouTube #Brandcast on Thursday in N.Y.C.

Noel Gallagher and Michael Fassbender toast to the world premiere of Alien: Covenant at the film's afterparty in London on Thursday.

Zoe Saldana is all smiles as she speaks on a panel discussion at the 5th Annual Moms + SocialGood event on Thursday in N.Y.C.

Patrick Dempsey is in good spirits as he attends the 2017 CURE Magazine event in Denver, Colorado on Thursday.

Paris Jackson enjoys some bonding time with her godfather, Macaulay Culkin, during a night out in Harlem on Monday.

Lion star and awards season scene-stealer Sunny Pawar is all smiles as he stops by This Morning on Friday in London.

Zoe Kravitz keeps it casual while out and about in New York City on Thursday.

Talk about a triple threat! Reese Witherspoon, Goldie Hawn and Kate Hudson come together at a double star ceremony honoring Hawn and Kurt Russell on the Hollywood Walk of Fame on Thursday.

Dakota Johnson steps out in New York City on Thursday.

Lily James is spotted on her phone while filming Guernsey in Aperley, UK on Thursday.

On Wednesday, Sharon Stone slips into a mini green dress for the West Hollywood premiere of A Little Something for Your Birthday.

Guardians of the Galaxy Vol. 2 stars Michael Rooker and Zoe Saldana are caught in a candid moment at their film's N.Y.C. screening afterparty.

Salma Hayek strikes a pose while her How to Be a Latin Lover costar, Eugenio Derbez, charms photographers with a rose at the film's Mexico City premiere.

Wearing an oversized trench coat, Rihanna can't help but express her excitement during a stroll through New York City on Wednesday.

Joe Jonas and girlfriend Sophie Turner walk around New York City wrapped up in each other's arms on Wednesday.

Jennifer Lopez and Ray Liotta film a funeral scene for Shades of Blue in Brooklyn on Tuesday.

Something keeps Jennifer Lawrence's attention as she films scenes for an upcoming movie at London's Heathrow Airport on Wednesday.

Chrissy Teigen is all smiles while toting a bouquet of flowers in Beverly Hills.

Gigi and Bella Hadid are spotted out together Wednesday in N.Y.C.

Guardians of the Galaxy Vol. 2's Dave Bautista flexes his heart out at a New York City screening for the action film on Wednesday.

Flip or Flop's Christina El Moussa picks up a green juice while giving her dog, Cash, a lift.

Cara Delevingne sports a pink wig on the Toronto set of Life in a Year on Wednesday.

Catherine Zeta-Jones! The Oscar winner performs during a tribute concert, honoring Jimmy Webb, at Carnegie Hall on Wednesday in N.Y.C.

Ariel Winter arrives at the Wednesday Modern Family ATAS event in a glam mini-dress with cutouts.

Keira Knightley poses for pics at a photocall before a Chanel fashion show in Paris on Wednesday.

Zoe Saldana flashes a smile during a visit to Sway in the Morning on Wednesday in N.Y.C.

Michael B. Jordan stays connected on Wednesday as he walks through N.Y.C.

Jessica Chastain poses next to a giant poster of herself at the Spanish photocall for her film, Miss Sloane, in Madrid on Wednesday.

Elisabeth Moss, Samira Wiley, and Alexis Bledel of The Handmaid's Tale take the stage at the Hulu upfront presentation in New York on Wednesday.

Chelsea Handler enjoys the sunny New York weather by going for a bike ride around the city on Wednesday.

Scarlett Johansson is all smiles as she arrives at the Planned Parenthood 100th Anniversary Gala on Tuesday in New York City.

Inside the Gala, singer Halsey speaks onstage in support of Planned Parenthood.

Ruby Rose is ever-chic in a black-and-white ensemble at the launch of the Burberry DK88 Bag at Burberry SoHo on Tuesday.

Guardians of The Galaxy Vol. 2 star Michael Rooker attends a Toronto screening of the film on Tuesday.

Matt Bomer picks up a healthy snack while out and about in L.A. on Tuesday.

Friendly exes Nick Cannon and Mariah Carey are in good spirits as they pose with Floyd Mayweather at the MC Records Launch Party, a joint venture with Epic Records, on Tuesday in West Hollywood. 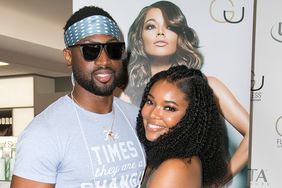 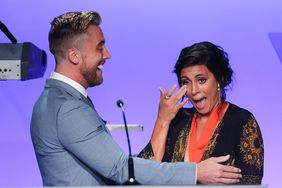 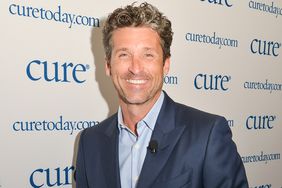 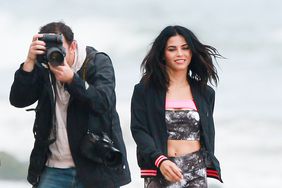 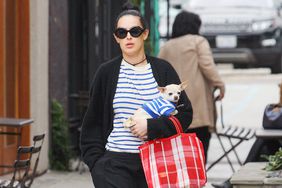 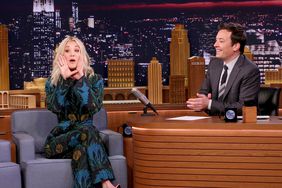 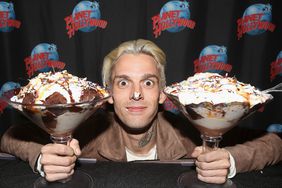 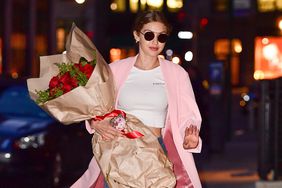 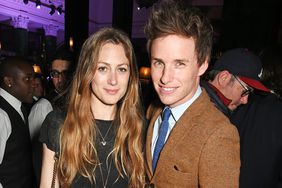 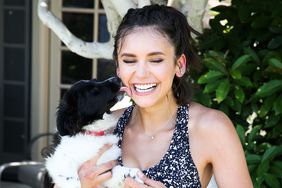 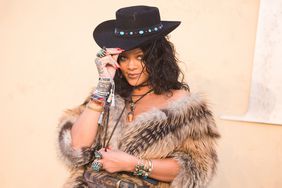 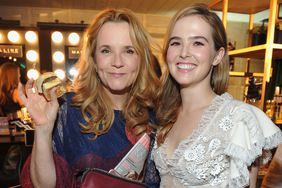 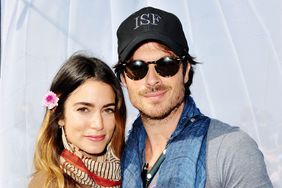 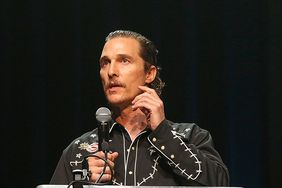 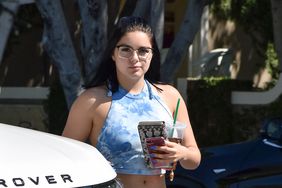