Rowland soaks up the sun during a beach day in Miami. Plus: Kate Winslet, Tina Fey & more!

It's all sun and sand for a white-hot Kelly Rowland, who keeps covered up during a stroll in Miami Beach on Sunday afternoon.

Katie Holmes gets cozy with Minnie Mouse on Sunday during a visit to Disney's Hollywood Studios theme park at the Walt Disney World Resort in Lake Buena Vista, Fla.

Top o' the mornin'! A beaming Duchess of Cambridge makes her yearly visit to Irish Guards in Aldershot, Hampshire, on Monday, giving shamrock sprigs to the men of the 1st Battalion. Her husband Prince William is an honorary Colonel in the regiment.

ON THE BRIGHT SIDE

Someone's getting leggy with it! Real Housewife Nene Leakes taps into her playful side with dance partner Tony Dovolani during a stop at the Dancing with the Stars season 18 gifting suite in L.A. on Sunday.

Pretty Little Liars stars Ashley Benson and Shay Mitchell share a happy reunion before talking up their hit show Sunday at the 2014 PaleyFest in Hollywood.

YOU SPIN ME 'ROUND

The wheels are turning for Cindy Crawford, who takes in Malibu, Calif., by bike on a Sunday family outing.

Muppets Most Wanted star Tina Fey finds herself in good (albeit hairy) company – hello, Sweetums the Muppet! – during a Sunday stop by Walt Disney World in Lake Buena Vista, Fla.

Ashley Greene lets her gym getup do the talking after a Sunday sweat session in Beverly Hills.

Kate Winslet walks and talks as she makes her way through Los Angeles International Airport on Sunday.

An upbeat Russell Crowe smiles his way through a photocall for his upcoming action drama Noah, a biblical epic flick based on the story of Noah's Ark, in Moscow on Monday.

PUT UP A FIGHT

Adriana Lima gives her kiss of approval at Saturday's BrazilFoundation gala in Miami.

Julianne Hough has her hands full after a Saturday shopping trip in Beverly Hills.

The love may be lost between Piper and Alex on Orange Is the New Black, but Taylor Schilling and Laura Prepon have no problem sharing a laugh at Friday's PaleyFest panel.

With their wedding day just two months away, Kanye West and Kim Kardashian take a break from planning for a movie date Friday at The Commons in Calabasas, Calif.

Matching her lipstick to her (newly shaved) head, Demi Lovato hits all the right notes during the Michigan stop of her Neon Lights tour on Thursday.

"I'm on a television show now, so I'm juggling working and being a mom," Halle Berry told PEOPLE recently. The actress looks no worse for the wear, however, filming Extant Friday in Los Angeles.

Mandy Moore flashes a grin while leaving the Jenni Kayne boutique in West Hollywood on Friday.

Does she have Dancing fever yet? Former Wonder Years star Danica McKellar is tickled pink as she arrives for Dancing with the Stars rehearsals in L.A. on Friday.

Lady Gaga, who appears to be really into recyclable clothing while in Austin, Texas, looks like a plastic bag-clad ice queen during a talk at the South By Southwest Festival on Friday.

A WALK IN THE PARK

Kristen Stewart shares a laugh with her Still Alice costar Julianne Moore while filming a scene on Friday in New York City.

Lily Allen (who is even wearing a horseshoe ring!) cheers on the racers during the Cheltenham Gold Cup horse race at the Cheltenham Festival on Friday in the U.K. 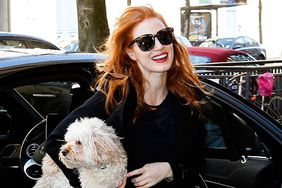