Dance queen Lady Gaga gets something off her chest – literally! – at the MuchMusic Video Awards in Toronto, Canada on Sunday. The edgy singer – who performed her hits "LoveGame" and "Poker Face" – was joined by Kelly Clarkson, the Black Eyed Peas and hosts the Jonas Brothers.

Need a lift? Paris Hilton trades Cadillacs for camels Sunday, traveling in style during a visit to Dubai. The heiress is in the Persian Gulf to film a new installment of her reality series, Paris Hilton's Dubai BFF.

Kicking off the U.S. leg of her "I AM …" world tour with style, Beyoncé (in a costume by Thierry Mugler) sparkles on the stage during the first of two N.Y.C. shows, performing her hit song, "Crazy in Love" alongside hubby Jay-Z at New York's Madison Square Garden.

Smile! The Hills' newest troublemaker, Kristin Cavallari, gets down with fans Saturday at club mur.mur in the Borgata Hotel in Atlantic City, N.J. The Laguna Beach alum starts her run on the MTV reality show this fall.

Putting his pedal to the metal, Shia LaBeouf gets his wheels turning with a bike ride Sunday through Studio City, Calif. The action star has been making the rounds promoting Transformers: Revenge of the Fallen, which opens June 24.

They'll certainly stand out in a crowd! Drew Barrymore and Justin Long make their allegiance known as they step out in Miami on Sunday. The two watched the Florida Marlins beat the New York Yankees and enjoyed some one-on-one time around the city.

Leah lays a happy Father's Day smooch on her dad Jon Gosselin Sunday afternoon, while elder sister Mady looks on. Over the weekend Jon played Mr. Mom, entertaining the kids with lacrosse and a Slip 'N Slide in the front yard of their Pennsylvania home. Wife Kate – mom to the couple's eight kids – was traveling.

Kate Hudson heads to Blade at Miami Beach's Fontainebleau Hotel after a cozy dinner with Yankees player Alex Rodriguez and friends Friday night. "They were affectionate with each other and very cute," a source tells PEOPLE of the couple – in town for his team's matchup against the Florida Marlins.

Looks like she's gone with the wind! Miley Cyrus steers the course for little sister Noah, 9, and an unidentified pal during a jet-ski ride Friday on a family vacation off the coast of Georgia.

Meanwhile, Nick Jonas (right) – who admitted he has with Miley Cyrus – soaks up the spotlight with brothers Joe and Kevin while performing Friday on the Today show in New York City's Rockefeller Center.

A new day means a new outrageous getup! A, ahem, cheeky Brüno – a.k.a. Sacha Baron Cohen – has a peekaboo moment with his red G-string in Amsterdam, the Netherlands, during a promotional event for his comedy – which opens in the U.S. on July 10.

Kristen Stewart takes the lead as she leaves her hotel with rocker Joan Jett on Thursday in Burbank, Calif. The Twilight star has been hanging with the rocker in preparation for playing her in the biopic The Runaways.

Heidi Klum gets herself in a twist, keeping her locks curled up as she arrives for a taping of her reality show Project Runway. The design competition will premiere on Lifetime on Aug. 20.

Reese Witherspoon ditches her softball gear for a red-hot halter dress on the Washington, D.C., set of her comedy How Do You Know on Friday.

After winning her appeal to adopt 3-year-old Mercy James from Malawi, Madonna arrives at London's Heathrow Airport in London with son David Banda, 3, on Friday. 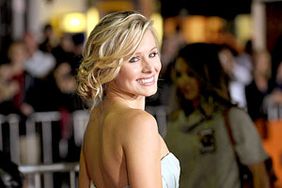