Jodie Turner-Smith sparkles at the Kering Women in Motion Awards Dinner on July 11 in Cannes.

Megan Thee Stallion wows the crowd with her performance at Hakkasan Nightclub on July 11 in Las Vegas.

Bella Hadid stuns on the red carpet in a couture Schiaparelli gown at the Tre Piani (Three Floors) premiere on July 11 in Cannes.

Doja Cat takes the stage in a cut-out top and skirt at E11EVEN on July 11 in Miami.

A$AP Rocky and Rihanna get cozy on a fire escape in neon looks while filming their music video on July 11 in N.Y.C.

Grace Gummer and Drew Barrymore pose together at a summer celebration hosted by Gucci and the Saltzman family on July 10 in East Hampton.

Virgin Galactic founder Sir Richard Branson and his crew toast the landing of Unity 22 with G.H. Mumm Champagne on July 11 in New Mexico.

Rihanna and A$AP Rocky are all smiles wrapped in each other's arms while filming a secret project together in New York City on July 11.

Naomi Osaka flashes a high-fashion peace sign at the 2021 ESPY Awards atop the Rooftop at Pier 17 in N.Y.C. on July 10.

Jackie Cox from RuPaul's Drag Race season 12 and Mercedes "MJ" Javid of Shahs of Sunset take a selfie together at the Bravo Clubhouse in N.Y.C. on July 10.

Anne Hathaway is spotted on the set of her upcoming drama miniseries WeCrashed in New York City on July 10.

Tom Cruise suits up for Wimbledon in London on July 10 alongside his Mission: Impossible 7 co-stars Hayley Atwell and Pom Klementieff.

Yara Shahidi enjoys her time at a screening of Questlove's new documentary Summer of Soul at The Greek Theatre in Los Angeles on July 9.

Lily Collins is spotted in a colorful costume on-set for season 2 of Emily in Paris in France on July 9.

Marion Cotillard attends the Bigger Than Us photocall during the 74th annual Cannes Film Festival in France on July 9.

Jason Sudeikis throws the first pitch at the Cubs vs. Cardinals game on July 9 at Chicago's Wrigley Field.

Jessica Chastain arrives in head to toe Versace at hotel Martinez during Cannes Film Festival on July 9 in France.

John Cena is seen on the set of The Peacemaker on July 8 in Vancouver.

Spike Lee and wife Tonya Lewis Lee arrive at the screening of Benedetta at the 74th annual Cannes Film Festival on July 9 in France.

Matt Damon arrives at the Stillwater photocall during the 74th annual Cannes Film Festival on July 9 in France.

Christina Haack and new flame Joshua Hall jump into a natural swimming hole in Tulum while on vacation on July 8.

Lizzo dances the night away at the JBL True Summer exclusive event on July 8 in Santa Monica.

Joe Jonas and Sophie Turner leave Avenue restaurant while out in France for Paris Fashion Week on July 8.

David Beckham suits up for day 11 of Wimbledon at the All England Lawn Tennis and Croquet Club on July 9 in London.

Vivica A. Fox hits the carpet at a private screening of Through Her Eyes, directed by Fox and produced by Tressa Azarel Smallwood, at Soho House on July 8 in West Hollywood.

Iskra Lawrence stuns in a lime green dress as she leaves her hotel in L.A. to head to The Nice Guy for a night out with friends.

Bling Empire's Christine Chiu is seen outside of the Martinez Hotel during the 74th annual Cannes Film Festival on July 9 in France.

Director Morgan Neville and Mark Ronson pose at the opening night of the Brasserie Les Halles Pop-up, hosted by Focus Features and Resy, in honor of the new movie Roadrunner: A Film About Anthony Bourdain, on July 8 in N.Y.C.

Tiktok star Avani poses at her Skechers meet and greet at Skechers Times Square on July 8 in N.Y.C.

Jodie Turner-Smith shows love at the Stillwater screening at the 74th annual Cannes Film Festival on July 8 in France.

Russell Wilson and Ciara enjoy their vacation in Capri on July 8.

Amy Schumer is seen on the set of Life and Beth on July 7 in Hudson Valley, New York.

Ryan Gosling breaks for a smile while filming The Grey Man on July 5 in Prauge.

Garcelle Beauvais is the picture of summer style on July 7 in Los Angeles.

Haley Lu Richardson, Malea Emma Tjandrawidjaja and Jodie Turner-Smith have a laugh on July 8 at the After Yang photo call at the Cannes Film Festival in France.

Sydney Sweeney and Steve Zahn get goofy on July 7 at The White Lotus premiere at Bel-Air Bay Club in Pacific Palisades, California.

Zoë Kravitz and designer Sara Elise Hardman raise a glass at a restaurant in Brooklyn on July 7.

Sophie Marceau has some fun with the cameras on July 8 at the Tout S'est Bien Passe photo call at the Cannes Film Festival in France.

Rose Leslie keeps it cool and casual for a walk in New York City on July 7.

Bong Joon Ho masks up at Cannes Film Festival on July 7 in France.

Rita Ora and Taika Waititi make a statement in bold patterns at Rita's rooftop party on July 6 in West Hollywood.

Adam Driver greets photographers as he arrives at the Annette photo call during the 74th annual Cannes Film Festival on July 6.

Also at Paris Fashion Week: Salma Hayek, looking chic as she arrives at the Balenciaga Haute Couture show on July 7.

Sutton Foster is all smiles as she poses with the cast during a photo call for Anything Goes at the Barbican Theatre in London on July 6.

Laura Dern and her daughter Jaya Harper hang out with Noah Jupe and his mom Katy Cavanagh at the July 3 Cinespia screening of Dazed and Confused in L.A.

Tayshia Adams shows off her street style in knee-high boots on July 6 in N.Y.C.

Keanu Reeves is spotted filming the 4th installment of John Wick in Berlin on July 6.

Jaime Camil flashes a peace sign while out and about on July 6 in L.A.

Spike Lee shines in all pink at the Annette screening and opening ceremony, during the 74th annual Cannes Film Festival on July 6.

Sarah Silverman goes for a stroll through N.Y.C. on July 6.

Jodie Foster and Alexandra Hedison embrace at the Annette screening and opening ceremony, during the 74th annual Cannes Film Festival on July 6.

Rihanna drips in pearls as she heads to dinner at Carbone on July 6 in N.Y.C.

Julia Louis-Dreyfus is seen filming on the set of Tuesday in London on July 5.

JAY-Z and Jon Bon Jovi get together at Michael Rubin's First Annual Fourth of July White Party in Bridgehampton, New York, on July 4.

Brook Shields and Mariska Hargitay buddy up on July 5 at the Cinema Society & Synchrony screening of Black Widow in The Hamptons, New York.

Jessica Chastain and Ellen von Unwerth cozy up for a selfie while attending the Christian Dior Haute Couture Fall/Winter 2021/2022 show as part of Paris Fashion Week.

Dakota Johnson gets into character for Netflix's adaptation of Jane Austen's classic book Persuasion on the Royal Crescent in Bath, England.

Bella Hadid rocks Westwood as she walks out of her hotel in Paris, France.

Elizabeth Olsen and Robbie Arnett treat themselves to some iced coffee after doing a workout together in Los Angeles.

Pete Davidson and Phoebe Dynevor make their first public outing as a couple cheering on Wimbledon.

Kendall Jenner shines in a metallic blue jacket for a photo shoot in Saint-Tropez.

Kate Middleton removes her sunglasses to get a good look at the Wimbledon players in London, England.

Adam Levine sprints through Miami during a workout on July 2.

Lady Gaga takes glam to the next level with her patterned blouse with oversized sleeves on July 2 in N.Y.C.

Tessa Thompson rocks a head scarf and mask while out in Hollywood on July 2.

Zoey Deutch steps out in L.A. in a flannel and leggings on July 2.

Wilmer Valderrama takes the stage during the Naval Station San Diego stop with United Service Organizations and the Vice Chairman of the Joint Chiefs of Staff Air Force Gen. John E. Hyten to visit military installations around the country on June 29.

Lady Gaga wears a gorgeous white gown and waves to fans while out in midtown N.Y.C. on July 1.

Lizzo signs autographs and takes photos with fans outside of Craig's in West Hollywood on July 1.

Justin and Hailey Bieber hold hands while out in Mykonos, Greece on June 29.

Ciara and Russell Wilson cuddle up while enjoying a gondola ride in Venice, Italy on July 1.

Rita Ora steps out wearing a floral dress and fuzzy sandals in West Hollywood on July 1.

Sebastian Stan transforms into Tommy Lee while playing the drums on the set of Pam and Tommy on June 30.

A$AP Rocky rocks a white tee, jeans and sneakers while out in N.Y.C. on June 30.

Nina West and Kristin Chenoweth pose at Stars in the House to celebrate $1 million raised for The Actor's Fund at Asylum in N.Y.C. on June 30.

Ciara and Russell Wilson walk arm-in-arm to dinner while out in N.Y.C. on June 30.

Vin Diesel shows love at game 6 of the Western Conference Finals of the 2021 NBA Playoffs between the Los Angeles Clippers and Phoenix Suns at the Staples Center in L.A. on June 30.

Chris Pratt arrives at the premiere of Amazon's The Tomorrow War at Banc of California Stadium on June 30 in L.A. The theatrical military convoy will be traveling throughout L.A. and Huntington Beach July 2-4 with a sedated White Spike alien specimen from the film.

Jordan Alexander, Savannah Smith and Whitney Peak share a smooch ahead of the N.Y.C. premiere of Warner Bros. Television's Gossip Girl, which debuts on July 8 on HBO Max.

Angèle and Rosalía pose at the Jacquemus La Montagne show at La Cite Du Cinema on June 30 in Saint-Denis, France.

Yvonne Strahovski is beaming with her beautiful baby bump at the premiere of The Tomorrow War at Banc of California Stadium in L.A. on June 30. 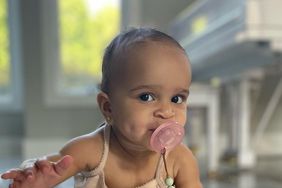