Britney Spears sparkles at Pure nightclub in Las Vegas where the newly single star hosted a New Year's Eve bash. A rep for the singer denied reports that she fainted at the party, saying: "She was just tired."

Onetime flames Wilmer Valderrama and Mandy Moore get cozy at Mansion in Miami, where the pair "had their hands all over each other," according to a source.

Hilary and Haylie Duff, who both recently split from their boyfriends, kick off 2007 at Mansion in Miami, where they partied with a bevy of gal pals.

Mary-Kate Olsen takes her recent platinum locks back to their honey-blonde roots in Los Angeles, where she debuted her toned-down look during a Thursday shopping excursion on Melrose Avenue.

STILL OF THE DAY

After a night of clubbing, Lindsay Lohan enjoys a more laid-back activity – lounging poolside – on Friday at the Delano Hotel, where the actress is set to host a New Year's Eve bash Sunday night.

Also in Miami, Wilmer Valderrama pipes up as the host of karaoke night at Mokai on Thursday. Like his ex Lohan, Valderrama is in town to reign over New Year's Eve festivities, hosting a party at Mansion nightclub.

Jamie-Lynn Sigler makes waves of her own while enjoying the Florida sunshine Thursday on Miami Beach.

A companion for pup Tinkerbell? Paris Hilton gets her hands on another furry friend – a stuffed kangaroo – while sightseeing in Sydney on Friday.

She has the day off, but nothing can tear a disguised Meredith Vieira away from the Today show! Pretending to be Matt Lauer's biggest fan, Vieira surprised her cohost Friday morning for an early celebration: both share the same birthday – Dec. 30.

Catherine Zeta-Jones adjusts her outlook – and her head gear – while enjoying a boat trip with her family on St. Bart's Thursday. 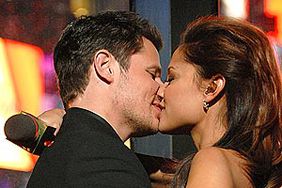 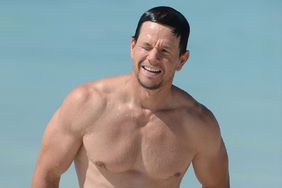