Reuben Selby and Maisie Williams step out for the Christopher Kane show during London Fashion Week on Sunday night.

You Know You Love Her, XOXO

Blake Lively is all about business at the Michael Kors NYFW 2020 Runway Show on Wednesday in N.Y.C.

To Have & to Hold

Huey Lewis and Jimmy Kimmel speak onstage during A Conversation with Huey Lewis at the GRAMMY Museum on Wednesday in L.A.

Kaley Cuoco makes a funny face for the camera while filming The Flight Attendant on Wednesday in N.Y.C.

Julia Louis-Dreyfus and Will Ferrell attend the premiere of Downhill at the SVA Theater in N.Y.C. on Wednesday.

Justin Bieber takes his electric bike for a spin on Wednesday in L.A.

Taylor Swift receives the Best Solo Act in The World Award at the NME Awards in London on Wednesday.

Kate Upton looks chic in a striped blazer and matching high-waisted shorts at a Canada Goose photo call in L.A. on Wednesday.

Anya Taylor-Joy gets into character with a cup of tea during a photo call for Emma in London on Wednesday.

Kylie Jenner steps out in a show-stopping red body suit as she leaves Roku restaurant in West Hollywood, California on Wednesday night.

Miley Cyrus shows off her toned abs on the catwalk during the Marc Jacobs show in N.Y.C. on Wednesday.

Rob Gronkowski shows off his toned physique while taking a dip in Miami on Wednesday.

Stanley Tucci and wife Felicity Blunt enjoy a night out at a Gymkhana VIP dinner in London on Wednesday.

Stevie Nicks and Sting pose for a selfie backstage at the musical The Last Ship at the Ahmanson Theatre in L.A. on Wednesday.

Zoë Kravitz and husband Karl Glusman hold hands as they take their dog Scout for a walk in N.Y.C. on Wednesday.

Zoey Deutch attends the Build Series in a blue and white plaid pantsuit to discuss Buffaloed at the Build Studio in N.Y.C. on Wednesday.

Mahershala Ali hits the red carpet for HBO's We Are the Dream on Tuesday in Oakland, California.

Amy Poehler heads to the set of Jimmy Kimmel Live! in great spirits on Tuesday in L.A. wearing a blue suit and white sneakers.

Jason Momoa arrives in Toronto, Canada to begin working on the second season of the TV series See on Tuesday.

Zazie Beetz and Caitriona Balfe are all dressed up with somewhere to go: The Rodarte show on Tuesday in N.Y.C. during New York Fashion Week.

This Is Us costars Sterling K. Brown, Mandy Moore and Justin Hartley are seen filming the NBC show in N.Y.C. on Wednesday.

Molly Ringwald and her daughter Mathilda share a sweet moment at the Just Drew X Klarna presentation in N.Y.C. on Tuesday.

Kim Petras takes the stage in a mini tutu at Shepherd's Bush Empire in London on Tuesday during her Clarity Tour.

Costars Jimmy O. Yang and Ryan Hansen coordinate in tropically patterned suits for the premiere of Blumhouse's Fantasty Island on Tuesday in L.A.

Alexander Wang and Janet Jackson pose with Chicago star Erika Jayne backstage after the show at The Ambassador Theatre on Tuesday in N.Y.C.

Ewan McGregor wears an all-black ensemble to the Naeem Khan show during New York Fashion Week on Tuesday in N.Y.C.

The Backstreet Boys join Jimmy Fallon for a barbershop quartet rendition of "Thong Song" on Tuesday's episode of The Tonight Show in N.Y.C.

Mark Wahlberg waves hello while out in sunny L.A. on Tuesday.

Lisa Rinna and daughters Amelia Gray and Delilah Belle match in their gray-and-black looks in N.Y.C. on Tuesday.

Michael B. Jordan and Megan Thee Stallion sit front row at the Coach 1941 NYFW show on Tuesday in N.Y.C.

Andrew Scott poses with his Best Actor award for Present Laughter at the 2020 Critics Circle Theatre Awards on Tuesday at The Prince of Wales Theatre in London. 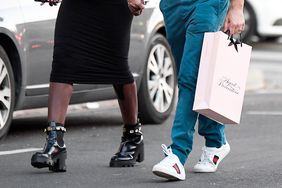 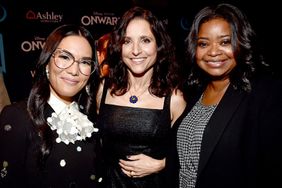 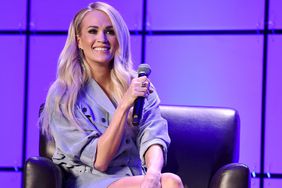 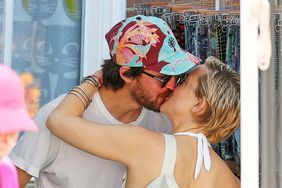