With her parents and beau Jay-Z watching from the sidelines, Beyoncé gives a jump-start to the day Friday in New York's Bryant Park as part of Good Morning America's concert series.

THE KNIGHT & 'THE DUTCHESS'

Fashion Rocks curator Sir Elton John (in Yohji Yamamoto) and Fergie (in Blumarine) stage a royal entrance at Radio City. Both singers will release albums next week – The Captain and the Kid for him, and The Dutchess for the Black-Eyed Peas frontwoman.

Denise Richards snuggles up to her main man Richie Sambora before the guitarist hit the stage with Bon Jovi at Fashion Rocks. The evening's proceeds benefit the Elton John AIDS Foundation.

Lindsay Lohan and boyfriend Harry Morton touch down at London's Heathrow Airport Thursday fresh from their stop at the Venice Film Festival. But the trip wasn't turbulence-free – Lohan's Hermès Birkin bag – containing "a quantity of jewelry," according to authorities – was stolen at the airport, though it was later recovered.

Ashton Kutcher hangs onto his guardian angel, wife Demi Moore at the Washington, D.C., premiere of his film Thursday, where the couple, who are set to celebrate their one-year anniversary on Sept. 24, nuzzled in for a close-up.

Ben Affleck and a Roberto Cavalli-clad Diane Lane light up the room with their megawatt smiles at the Beverly Hills premiere of their film Hollywoodland on Thursday. Affleck portrays television's first Superman, George Reeves, and Lane plays his bitter ex-lover in the drama, which explores the mysterious circumstances surrounding Reeves's 1959 death.

DINING WITH THE STARS

Nicole Kidman and Keith Urban go for a group hug with Donatella Versace and her daughter Allegra at a London dinner party hosted by Elton John's partner David Furnish (pictured left) in honor of the Italian fashionista on Thursday.

David and Victoria Beckham make fashionable strides as they touch down at the Venice airport on Thursday. Later that evening, the couple hold onto the night in coordinating black ensembles at the launch party for their new his-and-hers perfume, Intimately Beckham.

Jake Gyllenhaal manages to spin his wheels without chain gang Matthew McConaughey and Lance Armstrong during a ride around the Hollywood Hills on Wednesday.

He served out his court-ordered community service in New York City last month, and now Boy George is getting back to his true colors – smoky gray eye shadow – during a visit (and performance) at London's The Met Bar on Wednesday.

Back from her Labor Day weekend in Las Vegas, Oscar winner Reese Witherspoon goes undercover to see the Ryan Gosling drama Half Nelson at a Santa Monica theater on Wednesday. The actress's own big-screen comedy Penelope is unspooling this week at the Toronto Film Festival.

ALL THE SMALL THINGS

Taking a cue from her Princess Diaries past, Anne Hathaway looks positively regal at the Venice Film Festival premiere of The Devil Wears Prada on Thursday.

With newcomer Nicole Blonsky (right), John Travolta gets in touch with his inner diva Thursday to play Edna Turnblad on the Toronto set of Hairspray. The former-Saturday Night Fever heartthrob is reprising the role embodied by Divine in the original 1988 film, and recreated by Harvey Fierstein in the hit Broadway musical. 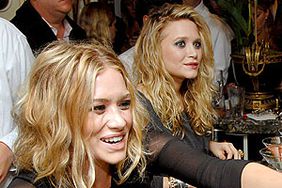 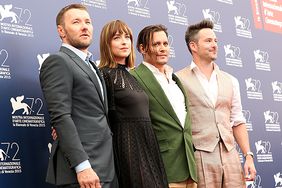