Who's got the pick of the litter of Halloween costumes? It's a perked-up Brooke Shields, who wears the purr-fect little festive accessory Friday as she runs errands in New York City.

Kim Kardashian may not have super powers – but she has one stellar look! The reality star sported a Wonder Woman getup for her gig as host of PAMA's Halloween Masquerade Thursday night at the Stone Rose in Los Angeles.

Bringing their own sweet treats to the party, Mariah Carey and husband Nick Cannon get into the festive Halloween spirit Thursday, dressing up as the perfect pair – milk and cookies! – for their Halloween Eve costume party at Marquee nightclub in New York City. It was a two-costume evening for the duo, who arrived to the bash as firefighters.

Self-proclaimed "tech junkie" Eva Longoria Parker shares a smile – and some PDA tips – with BFF Mario Lopez at the BlackBerry Bold launch party Thursday at a private residence in Beverly Hills. "I just converted Mario to the BlackBerry," the Desperate Housewives star tells PEOPLE. "He just got it this week and now there's a new one."

Hugh Jackman leads his "skin and bones" son Oscar safely across the street Friday during an afternoon of trick-or-treating through the Woollahra neighborhood in Sydney, Australia.

No sibling rivalry here! Beyoncé and Solange Knowles show nothing but solidarity Friday at the opening of Tiffany amp Co.'s new multi-brand retail boutique, Eight Million, in Tokyo on Friday.

With the election days away, Sarah Jessica Parker stays dialed into the political process on Wednesday in New York. The actress volunteered at Barack Obama's Big Apple headquarters, urging undecided voters to make their choice.

Call it an early Halloween treat! Heidi Klum and hubby Seal share a family day with their children at Disneyland in Anaheim, Calif., on Thursday.

Halloween comes early for Katie Holmes and daughter Suri, who look like two pumpkins in a patch in their matching orange outfits during a playdate in New York's Central Park on Thursday.

Halle Berry goes from big, bouncy curls to a long, straight locks Thursday on the set of her new movie Frankie and Alice, currently filming in Vancouver.

Ashley Olsen braves New York's chilly fall weather in a little black dress and matching jacket for an appearance Thursday on the Late Show with David Letterman. Olsen and her sister Mary-Kate are promoting their coffee-table book Influence.

In Australia, Snoop Dogg has the prescription for a good time (with his naughty nurses) at the Arnette Sunglasses party Thursday in Sydney's Nevermind nightclub.

Keira Knightley and boyfriend Rupert Friend complement each other perfectly – check out their caps! – during a walk Thursday in New York.

Hilary Duff cuddles her pet pup with care Thursday as she heads into an appointment in Toluca Lake, Calif. 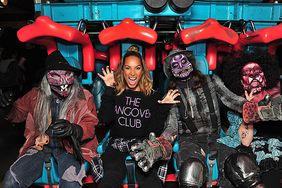