Eric Dane catches some air before crashing into the water while frolicking on the beach Thursday with wife Rebecca Gayheart (who went topless) during their Caribbean getaway to St. Bart's.

Justin Timberlake joins fellow Lakers fans Denzel Washington, David Beckham and Will Smith Thursday night at L.A.'s Staples Center to cheer on the home team in Game 4 of the NBA finals. Despite the all-star lineup, the Lakers lost 91-97 to the Celtics, who are ahead 3-1 in the series.

While his ex Sarah Larson recently returned to her old stamping grounds – Vegas, baby! – newly single George Clooney takes to the waters of Lake Como, Italy, with a buddy on Thursday.

A cheerful Halle Berry is ready to dish the dirt Thursday on her former Bulworth costar Warren Beatty, who was honored with the 36th annual American Film Institute Lifetime Achievement Award at Hollywood's Kodak Theatre.

Kenny Chesney brings a little country to New York City as he performs on NBC's Today show summer concert series on Friday. The singer continues his Poets and Pirates tour this weekend in Pittsburgh.

Rock on! Office star Rainn Wilson swaps his suit and tie for some after-hours leather and skin Friday at the Las Vegas screening of his new comedy, The Rocker, at the CineVegas Film Festival.

Sporting a sun-kissed look, Alicia Keys makes a star arrival Thursday at the New York premiere of We Are Together, the award-winning documentary about the Agape Orphanage in South Africa. Keys told PEOPLE at the event that while she's "not ready to be a mom," she's open to adoption in the future.

Sandra Bullock stays one step ahead of the oncoming cars in traffic-stopping red boots as she continues filming the comedy All About Steve Thursday in Los Angeles. In the film, Bullock plays a woman who is convinced that a CNN cameraman is her true love.

He may not be their target demographic – but American Idol winner Taylor Hicks can't help but go crazy for the Jonas Brothers Thursday in New York. Hicks was taking part in a Live with Regis and Kelly segment to promote his Broadway role in Grease when he stopped to join the Jonas Brothers fandemonium.

A few days after their date night at a new sushi restaurant, Joel Madden and Nicole Richie take 5-month-old daughter Harlow for a spin Thursday through their leafy Glendale, Calif., neighborhood.

Paging Marge Simpson! Amy Winehouse has a hair-raising adventure – literally! – while leaving her London home in a rush Thursday morning.

Mischa Barton hunts for the perfect antidote to a hot New York day: an icy beverage! The actress stopped by a Duane Reade drugstore Thursday to quench her thirst.

Usher raises his champagne flute to the good life – and his album Here I Stand – at a promotional event Thursday in Tokyo, Japan. "I'm very happy, and in a great place being a married man," the singer told the AP recently. 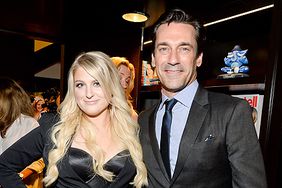