Hey baby! Kourtney Kardashian totes her , 5-month-old Mason, while leaving a taping of Jimmy Kimmel Live! in Hollywood on Thursday.

Julia Roberts and Oprah Winfrey just can't get enough of each other Thursday night while celebrating director Mike Nichols at the AFI Life Achievement Awards in Culver City, Calif. The Eat, Pray, Love actress kicked off the night's events, which included a speech from Meryl Streep.

Zach Galifinakis looks on affectionately as Will Arnett and Bradley Cooper share a hug at the launch party for Arnett and Jason Bateman's new comedy company, DumbDumb, Thursday in New York.

Watch out, Zac! Vanessa Hudgens cuddles up to another cute dude – Mickey Mouse! – before the premiere Thursday of a new light show, "World of Color," at Disney California Adventure in Anaheim.

Is he getting ready for the World Cup? Gossip Girl star Penn Badgley shows off his stellar soccer skills on Thursday at a launch party for Havaianas Team Sandals at Barneys New York.

Get Him To The Greek star Russell Brand hugs a blue-haired Katy Perry lookalike (from the back, anyway) after his stand-up comedy show Thursday in Sydney, Australia.

Meanwhile, the real soon-to-be Mrs. Brand, Katy Perry, donned another colorful do Thursday during the Germany's Next Top Model finale in Cologne, Germany

Follow that girl! Kate Hudson looks fashionably ready for her Something Borrowed close-up alongside costar John Krasinski (not pictured) in New York City.

Making multitasking look easy, Jennifer Garner balances a cup of coffee in one hand and animated 17-month-old daughter Seraphina in the other during a Santa Monica, Calif., outing on Thursday.

AnnaLynne McCord looks good while doing good! The star was treated to a manicure Thursday in Hollywood as part of an event for Sally Hansen's "Color That Cares" campaign, which benefits the leukemia charity DKMS.

Jennifer Lopez gleefully watches the unveiling of a Boys amp Girls Club billboard – with a photo of her as a child! – in New York's Times Square Thursday. She told fans that it was at a Club outpost in the Bronx where she learned to sing and dance.

Uma Thurman – sporting a brunette bob and retro get-up – looks at life through her own lens while filming in New York City on Thursday. 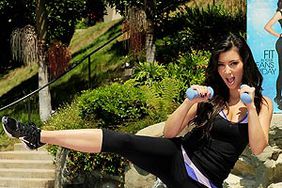