Lorde performs at the Good Morning America Concert Series in N.Y.C. on Aug. 20.

Tracee Ellis Ross wears a bright blue dress with yellow accessories (and a face shield) as she heads to Jimmy Kimmel Live on Aug. 19 in L.A.

Bella Hadid embraces the Y2K fashion trends while out and about in London on Aug. 19.

Time to Bust a Rhyme

Jennifer Hudson looks stunning as she performs on stage at the Apollo Theater presented by Mastercard in N.Y.C. on Aug. 19.

Vince Jones steps out for the first time (and debuts his a shaved head) in character for Law & Order: Organized Crime in N.Y.C.

Rami Malek does some grocery shopping in L.A. on Aug. 19.

Shawn Mendes takes his dog out for walk through Toronto on Aug. 18.

Eiza González grabs coffee for two after hitting the gym in Studio City on Aug. 18.

Megan Fox channels some ocean hues on Aug. 18 while arriving to Milk Studios in Los Angeles.

Christopher Meloni gets goofy for the cameras on Aug. 18 while filming Law & Order: Organized Crime in Queens, New York.

David and Victoria Beckham are the picture of cool on Aug. 18 while watching Inter Miami take on the Chicago Fire in soccer at DRV PNK Stadium in Fort Lauderdale, Florida.

Marion Cotillard glows on Aug. 18 at the premiere of Annette at the Hollywood Forever Cemetery in Los Angeles.

A smiling Naomi Osaka gets chatty on Aug. 18 during the 2021 Western & Southern Open WTA 1000 tennis tournament near Cincinnati, Ohio.

Kesha takes a moment on Aug. 18 during her performance at ACL Live at The Moody Theater in Austin, Texas.

Orlando Bloom and his pooch enjoy an Aug. 18 stroll in Prague, Czech Republic.

Emerald Fennell hits the curtain call at the press night performance of Cinderella at the Gillian Lynne Theatre in London on Aug. 18.

Ted Lasso star Cristo Fernández throws the first pitch at the Dodgers vs. Pirates game on Aug. 17 in L.A.

Rachel Bilson goes snorkeling while on vacation in Hawaii on Aug. 16.

Jennifer Hudson heads to rehearsals at the Apollo Theatre in N.Y.C. on Aug. 18.

Kiernan Shipka runs errands in Hudson Valley in a t- shirt, shorts and white trainers on Aug. 17 in New York.

Miley Cyrus and her mom Tish go shopping at the Ben Soleimani furniture store in West Hollywood on Aug. 18.

Bella Hadid and Marc Kalman spend the day together in London on Aug. 18. 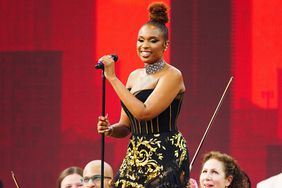