Awaiting the birth of their second child, Gwen Stefani and Gavin Rossdale keep up the pace after an appointment at an L.A. hospital on Thursday.

Mario Lopez satisfies his sweet tooth with an assortment of Cold Stone Creamery ice cream cakes Thursday, as he and costars celebrate the milestone closing of Broadway's A Chorus Line backstage at the Schoenfeld Theatre in New York City. Next, PEOPLE's Hottest Bachelor will head west to host Extra.

Strolling hand-in-hand, Tom Cruise escorts wife Katie Holmes to rehearsals for the play All My Sons Friday in New York.

Lindsay Lohan, who recently shot down rumors of sister Ali having breast augmentation surgery, puts the drama behind her Thursday during a night out with Samantha Ronson at the grand opening of Apple Lounge in West Hollywood.

Kim Kardashian keeps her cool with an ice cream treat while driving around Los Angeles on Thursday.

She may claim she's on the D-List, but Kathy Griffin and her mother Maggie share a real A-List activity – shopping at Chanel! – Thursday in Beverly Hills. The funny family just wrapped the fourth season of their Emmy-winning show,

My Life on the D-List.

Debra Messing gets a few extra kisses from a loving puppy Thursday while on the Los Angeles set of her hit show The Starter Wife, which returns to the USA Network on Oct. 10.

After her glamorous arrival the day before, Fergie scans the racks and snags a nature-themed top Thursday while shopping on Chelsea's fashionable Sloane Street in London.

Is he a shoe-in for dutiful husband or what? Tori Spelling's husband Dean McDermott balances a stack of shoe boxes and totes a shopping bag Wednesday following the couple's spree on L.A.'s Sunset Plaza.

Minnie Driver – keeping a hand on her burgeoning baby bump – is in responsible citizen mode Wednesday as she prepares to clean up after her pooch Bubba during a Malibu beach walk.

Continuing her chic streak, Katie Holmes steps out in black leggings and a bright pullover top Thursday as she continues rehearsals for All My Sons in New York's Greenwich Village.

Don't let the casual clothes fool you: Leonardo DiCaprio and pal Lukas Haas have a taste for high fashion, evidenced by their successful shopping trip Wednesday to a Los Angeles Prada store.

It's the little sisters club! Solange Knowles and expectant mom Ashlee Simpson Wentz do some backstage bonding Wednesday during a taping of FNMTV, the MTV video show hosted by husband Pete Wentz.

Kelly Osbourne and her model beau Luke Worrell make a dapper duo during a stroll through London on Thursday. 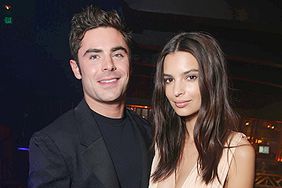