A week after filing for divorce from husband Ryan Phillippe, Reese Witherspoon gets back to work Tuesday – carrying some faux baby weight – on the Los Angeles set of her new film, Rendition. The thriller also stars single (and sexy) actor Jake Gyllenhaal.

A formally dressed Tom Cruise escorts bride-to-be Katie Holmes and their six-month-old daughter Suri through the throngs of fans to Rome's City Hall to take care of some pre-wedding business on Wednesday.

To get up-to-the-minute reports on all their wedding preparations, check our Tom amp Katie Wedding Blog.

First London's West End, now Broadway, baby! Ashlee Simpson makes a dash to take part in the 10th anniversary performance of Chicago at New York's Ambassador Theatre on Tuesday. Of performing alongside such Broadway luminaries as Chita Rivera and Bebe Neuwirth, Simpson told PEOPLE, " It's easy for me because I had just done Chicago in London, but it's also nerve-racking because you're with the people who started the show… It's good nerves."

Brooke Shields gets into the spirit of pantomiming at the 10th anniversary performance of Chicago on Tuesday, where she sang "We Both Reached for the Gun."

Halle Berry toasts model boyfriend Gabriel Aubry during the opening of his Cuban-themed restaurant, Café Fuego, in New York on Tuesday. And how does the couple, who just marked their one-year anniversary, keep the heat in their romance? "I do the serving," Aubry told PEOPLE. To which Berry responded, "Finally, finally, there is a God."

Naomi Campbell, who is facing new charges of assaulting a former maid, takes her case before the judge in Manhattan Criminal Court on Wednesday, where the supermodel was on hand for a case of hitting a different employee.

Jennifer Lopez debuts a new hairdo while out in Beverly Hills on Tuesday. Perhaps influenced by husband Marc Anthony, the singer-actress is set to release her first Spanish language album, Como Ama Una Mujer (The Way a Woman Loves), early next year.

Her mission: globe-trotting fun! Lindsay Lohan leaves the Casino Royale afterparty on Tuesday to hit a few more London hot spots. The actress, who reportedly avoided contact with on-again, off-again pal Paris Hilton at the premiere party, moved on to Paper and Soho House before calling it a night.

Will Smith breaks it down to the beat of the Townview Magnet Band at the Dallas premiere of his latest film, The Pursuit of Happyness, on Tuesday. In the film, Smith teams up with real-life son Jaden, 8, to play a struggling father who takes custody of his child.

Almost a year since her split with Nick Lachey, a solo Jessica Simpson indulges in a favorite pastime – shopping – in Beverly Hills on Monday.

The Hollywood Hills welcomes back one of its amigos, Jake Gyllenhaal, who slips comfortably into spandex, for a ride on Monday.

Funnyman Will Ferrell gets some unexpected parenting tips from talk-show host Ellen DeGeneres and a dummy on the impending birth of his second child – another boy to join son Magnus, 2 – on Tuesday.

It's a model airplane! The Victoria's Secret "angels" high kick their way out of New York Tuesday en route to Los Angeles, where the supermodels will take over the Kodak Theatre for the annual Victoria's Secret Fashion Show. "I'm going to dance down the runway," Gisele Bündchen (center) tells PEOPLE of how she plans to strut her lingerie during Justin Timberlake's guest performance at the show.

Despite windy conditions, Joss Stone maintains her composure Tuesday at the U.K. Music Hall Of Fame honors in London. The retro-fitted singer paid tribute to '60s icon Dusty Springfield, who was inducted into the Hall along with other rockers, including Prince, James Brown and Bon Jovi.

Nicole Richie, who has been seeking treatment for her weight issues, hits Barneys in Beverly Hills for a wardrobe update on Monday.

Lost star Matthew Fox uses his day off to get an adrenaline rush, motoring around Oahu, Hawaii, on Sunday. 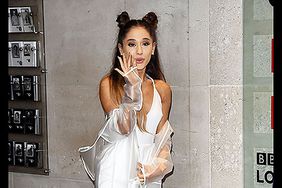 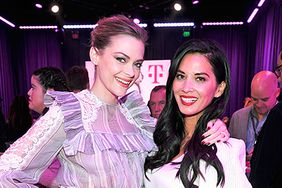