Did someone call for a superhero? The actress and her husband get into the Halloween spirit – she as a cat, he as Superman! – while trick-or-treating with their daughters in Pacific Palisades, Calif.

She's not afraid to shine! Channeling her inner Toddlers and Tiaras beauty queen, the sparkling singer is ready for her close-up at Heidi Klum's 12th annual Halloween party in New York.

No stranger to celebrating the holiday, the How I Met Your Mother star adds a sweet touch to her scarecrow costume while trick-or-treating with her little pumpkin, 2-year-old daughter Satyana, in Santa Monica, Calif.

Say cheese! The reality star is cute as can be thanks to her spot-on Minnie Mouse ensemble at the Bacardi- and Maroon 5-hosted Halloween bash at L.A.'s Hollywood Forever Cemetery.

The expectant mom shrouds her burgeoning belly in a simple black and purple witch's costume in Brentwood, Calif.

Rock and roll! Ford and Flockhart flaunt their love for '80s hair bands at a Halloween night bash in Brentwood, Calif.

The actress can't help but clown around while trick-or-treating with her boys Sasha, 4, and Kai, 2, in N.Y.C.

Congratulations are in order! The Today cohosts give royal watchers something to cheer about as the Duke and Duchess of Cambridge during the morning show's Halloween taping in N.Y.C.

The Live! host and Lachey take their costumes to new heights Monday as reality TV's most buzzed-about (and now broken-up) couple, Kim Kardashian and Kris Humphries, during the chatfest's Halloween Headliner Ball in New York City.

Meanwhile, the real Kim made a solo appearance as Batman bad girl Poison Ivy at a Midori-sponsored party at New York nightclub Lavo on Oct. 29. Two days later, the newlywed filed for divorce from husband of 72 days Kris Humphries.

Sans Prince Charming, the pop star makes her fairy tale fantasy come true, stepping out as Cinderella for a Halloween party in Los Angeles on Oct. 29.

The costume enthusiast strips down – literally! – as a cadaver, displaying every muscle in her body for her Halloween party at Tao Las Vegas on Oct. 29.

Just call her Nicky from the Block! With a pink Juicy Couture tracksuit and big hoop earrings, Richie busts out her best J.Lo impression for Kate Hudson's annual costume party in L.A.

Daytime TV now has not one, but two silver foxes – thanks to the CNN anchor, who pays homage to talk-show legend Phil Donahue during a taping of Anderson on Oct. 31 in New York.

Who needs a sugar fix? The Parks and Recreation star gets a taste of the sweet life, hitting Hudson's Halloween shindig as a Charms Blow Pop.

The actress and her hubby create a little buzz in coordinated bumblebee costumes while at Hudson's bash.

The Ice Loves Coco stars make a menacing pair – he as Silence of the Lambs' Hannibal Lector and she as a sexy little devil! – while cohosting the Halloween Player's Ball at LAX nightclub in Las Vegas on Oct. 29.

The Incredibles to the rescue! Halloween came a little early for Carey and hubby Nick Cannon, who dressed up their 6-month-old twins, Moroccan and Monroe, in matching superhero disguises.

Shiver me timbers! Bullock and 20-month-old son Louis dress the part during a pirate-themed birthday party on Oct. 9 in Brentwood, Calif.

The talk show host finds herself in a fairy tale as Little Red Riding Hood while guest Jerry Springer goes Gaga during a segment for her show on Oct. 25.

Welcome to the witching hour! The Law & Order: SVU star (and mom of three) casts a spell over her little pumpkin, 6-month-old daughter Amaya Josephine, during the Light Up a Life benefit in New York City on Oct. 22. 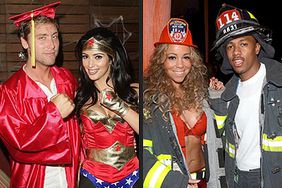