From Mischa & Nicole to Jake & Matthew, tell us whom you want to spend some QT with. By Julia Wang

THE SINGLE GUYS
On the road and on the town, these bachelors have a pack mentality. Where we've spotted them together: cycling through the Malibu hills, hitting the L.A. clubs and even suiting up together for the ESPY Awards. And with Armstrong, 34, reportedly crashing at the 36-year-old McConaughey's Malibu beach pad – where Gyllenhaal, 25, is a frequent guest – the party's just getting started.

THE GIRLS FROM THE BLOCK
Bronx-born Jennifer Lopez, 37, and Brooklyn girl Leah Remini, 36, who met in the late '90s, are in a New York state of mind. The pals often go on low-key double dates with their respective husbands Marc Anthony and Angelo Pagan. "We sing karaoke," Remini tells PEOPLE, and they shop together (left, at Fred Segal) and support each other on the red carpet (at the ALMA Awards in May).

THE CLUBGOERS
For Paris Hilton, it's not a party without her stylist pal (and Nick Lachey ex) Kim Kardashian. The Hollywood scenesters, both 25, sometimes even coordinate their fashionable entrances – recently hitting hot spot Hyde in matching floral sundresses, going pretty in pink at a Dom Pérignon bash and pairing up in Prada at the design house's Beverly Hills fête.

THE BEACH BABES
And while Paris has Kim, ex-BFF Nicole Richie has a new sidekick too: Mischa Barton. "They enjoy shopping and spending time together," says a rep for the two, who planted themselves on the Malibu shore along with a menagerie of pets and pals earlier this summer. "Shocker! They really do get along."

MANE SQUEEZES
"Ken and I are soulmates," Jessica Simpson told PEOPLE of her longtime stylist and right-hand man Ken Paves, 34. Since her split from Nick Lachey, he's been her rock steady, whether shopping for LV bags, walking the red carpet or celebrating Simpson's 26th birthday in July in Cabo San Lucas (left).

THE NEW DADS
Their babies were born a day apart, so it's only natural that Brad Pitt, 42, and longtime buddy Gavin Rossdale, 40, took time to celebrate – by revving up their engines at Pitt's Santa Barbara compound. While Rossdale's wife Gwen Stefani and 2-month-old son Kingston said hello to Angelina Jolie and new daughter Shiloh, the boys were riding four-wheelers (left, with Maddox Jolie-Pitt, 4).

THE MOMMIES
Kate Hudson, 27, and Liv Tyler, 29, struck up a friendship while filming 2000's Dr. T and the Women. Since then the working moms (left, at a recent New York City bash) have both gone on to marry rocker hubbies, and now share baby talk over Hudson's son, Ryder, 2, and Tyler's 19-month-old tyke, Milo.

THE GLOBETROTTERS
Since bonding on the set of Charlie's Angels in 2000, Cameron Diaz, 33, and Drew Barrymore, 31, have mapped out a worldwide friendship. In 2004, Barrymore trekked to the Chilean rainforest with Diaz for her eco-travel show Trippin', and just last month the heavenly duo shaked and baked together in the Bahamas before hooking up in Paris.

THE SUPPORT NETWORK
Hilary Swank, 31, was there when pal Mariska Hargitay, 42, wed actor Peter Hermann in 2004, and this year the Oscar winner helped the Law amp Order: SVU star get ready for baby August (born June 28) at her March shower. And before she gave birth, Hargitay hooked up with the newly single Swank for lunch and shopping in Malibu (left).

THE BACKUP BUDDIES
When Mischa's not around (she's been spending part of the summer in London), Nicole Richie grabs hold of another friend – Lindsay Lohan, 20. The gal pals have quickly gone from not talking "in a while," according to Lohan in March, to being steady summer standbys. They even sashayed in tandem at a May fund-raiser (left) and partied on the Malibu shore for Lohan's July birthday. 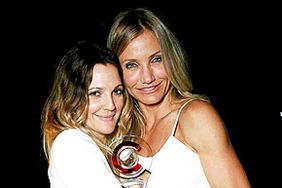