Sandra Bullock and Jesse James are not living under the same roof right now.

The actress left the Southern California house she shares with James just days before a report of infidelity by her husband surfaced, a source tells PEOPLE.

Bullock, 45, left on Monday, the source says. Bullock, who won her first Oscar – a Best Actress award – for The Blind Side on March 7, also abruptly canceled a trip to Europe for the London premiere of the film.

Bullock and James, 40, met in 2004 during a tour of the set of the Discovery Channel’s Monster Garage, which James starred in.

The couple married a year later, in July 2005 in a sunset ceremony at a ranch north of Santa Barbara attended by 300 guests.

RELATED: Jesse James Apologizes to Sandra Bullock and His Children 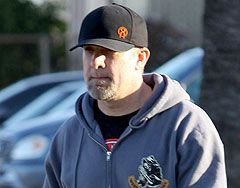