After Solange Knowles and Alan Ferguson tied the knot Sunday, they took the party to the streets!

When their reception ended at New Orleans’s Marigny Opera House, the stylish bride, her groom and guests were greeted by cheers as they boarded party buses bound for NOLA’s historic Tremé neighborhood.

Once they piled off buses, the wedding party gathered for a traditional second line parade with a brass jazz band.

“It was fun,” onlooker Taray Roberts, 23, tells PEOPLE. “Everybody lit up sparklers, and Solange and Alan danced the whole time.”

Sister Beyoncé was on hand to partake in the fun, while mom Tina and brother-in-law Jay Z “didn t really dance,” Roberts says. “He held the fan that second lines carry as Beyoncé danced.”

Another special guest in on the fun? Knowles’s son Daniel Julez, 10.

The bride and her son also showed off their moves to “No Flex Zone.” (See the action below!) The newlyweds celebrated in the street for about an hour before heading to the New Orleans Museum of Art for the afterparty.

Solange and Julez NO FLEX ZONE from Charlotte Hornsby on Vimeo. 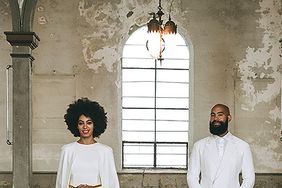 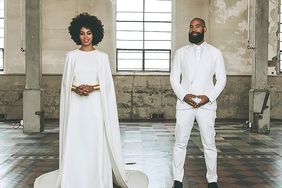 Solange Knowles: My Wedding Was the 'Best Day of My Life'

Holy Matrimony! An Acting Troupe Joins Together, in Bonds of Satire, the Irrepressible Tony and Tina