Vergara, husband-to-be Joe Manganiello and their friends and family prep for Sunday's festivities with a pre-wedding pool day

After months of planning her wedding to Joe Manganiello, Sofia Vergara finally gets to take a break.

The soon-to-be spouses are spending Saturday, the day before the wedding, by the pool at The Breakers Palm Beach, Florida, along with family and friends.

The Modern Family star, 43, posted a picture on Instagram on Saturday on her way to the pool. In the picture, Vergara looks especially bridal in a long, white lacy cover-up over a white bikini.

“Pool day!!!! We r ready,” she captioned the pic, and added a few “party” emojis for good measure.

Vergara’s son Manolo Gonzalez-Ripoll Vergara has already posted several pics of himself and his family members soaking up the sun at the pre-wedding pool day. One of his poolside photos shows several family members sporting T-shirts with “#Jofia,” the couple’s nickname, emblazoned on them in shiny gold letters.

On Friday, the bride-to-be posted a photo of herself, Manganiello and celebrity florist Jeff Leatham, putting the finishing touches on their wedding preparations.

“We r almost ready!!” she captioned the picture, in which she, again, is already embracing being a bride in a crisp white blazer and top.

Vergara and Manganiello, 38, have been dating for almost a year and a half. The Magic Mike XXL star proposed to her over Christmas last year after plenty of careful planning. 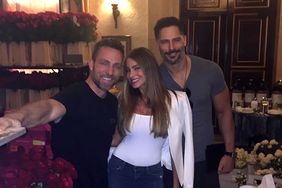 Sofia Vergara and Joe Manganiello Put Finishing Touches to Their Wedding: 'We Are Almost Ready!'