The athletic couple tied the knot on New Year's Eve

They’re a match on and off the field.

The couple, who got engaged last December, rang in the new year in style, exchanging vows in front of 180 guests at Rancho Dos Pueblos in Santa Barbara, California.

“To be surrounded by our family and friends tonight in such a beautiful location, and on New Year s Eve to boot, has just been magical,” Morgan told PEOPLE.

“We are both so happy, grateful and excited to start our lives together as Mr. and Mrs. Carrasco,” she added. “I truly married my best friend.”

The bride wore a beautiful gown by Berta Bridal, then switched into a custom Amsale dress for the reception, where the pair danced to Jack Johnson’s “Better Together.” As for Carrasco? He wore an Armani tux.

And, in honor of Carrasco’s upbringing, guests enjoyed a Mexican-American dinner that was served family-style and included a quesadilla bar and homemade churros.

They celebrated well into the night with a live band followed by a DJ. The festivities even included a balloon drop at midnight.

Morgan led the U.S. to gold during the 2012 Summer Olympics.

The U.S. narrowly made it to the finals thanks to a last-minute goal made in extra time by the 25-year-old striker in a match against Canada.

“I can’t remember ever feeling this way after scoring a goal,” Morgan said later. “It’s just so exhilarating.”

Carrasco’s no lightweight, either: The 26-year-old is a star midfielder for the Major League Soccer team the Houston Dynamo. 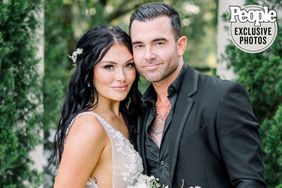