The children will be the first for the athlete and her L.A. Dodger husband

Hamm, 34, played on the U.S. women’s national soccer team for 18 years. When she retired after the 2004 Athens Olympics, the Wichita Falls, Texas, native had won two World Cups and two Olympic gold medals.

Because of her pregnancy, Hamm recently turned down an invitation to be inducted into the Texas Sports Hall of Fame in February, telling officials she would accept the honor in 2008 instead, the Austin-American Statesman reports.

According to the paper, a rep for Hamm said her doctor had advised her not to travel after January because she is due in early spring.

Hamm and Garciaparra live in Los Angeles. Garciaparra joined the Dodgers this year; he previously played for the Chicago Cubs and the Boston Red Sox. 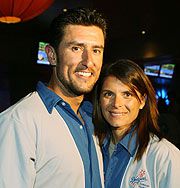 Mia Hamm on her twin pregnancy

Mia Hamm and Nomar Garciaparra pose with their twin girls