The rapper was carrying a police baton at airport security, says the D.A.

Prosecutors have charged Snoop Dogg with one felony count of knowingly possessing a dangerous weapon at John Wayne Airport in Orange County, Calif., the district attorney there announced Thursday.

The rapper (real name: Calvin Broadus), 35 – who has sold more than 17 million records and appeared in such films as Starsky and Hutch – was arrested on Sept. 27 after allegedly trying to board a plane while carrying a 21-in. collapsible police baton in a computer case.

If convicted, he faces a potential maximum of three years in state penitentiary. Bail was set at $150,000.

After being taken into custody, the rapper was freed on $35,000 bond. His arraignment is scheduled for Dec. 12 in Los Angeles County Superior Court in Burbank.

And in another airport incident at London’s Heathrow in 2004, Snoop Dogg and several members of his entourage were arrested after an altercation in the business class lounge, which they apparently did not have permission to use. 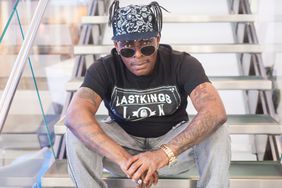