(Warning: Do not read if you taped Tuesday’s “NYPD Blue” but have not yet watched it.) Instead of shuffling him off to a desk job in Staten Island or making him walk the beat in Queens, “NYPD Blue” killed off Jimmy Smits’ character Bobby Simone Tuesday night. Smits had announced his departure from the ABC drama in April, but there was some question as to how he would leave the character he has played for four seasons. As viewers learned Tuesday night in a wrenching 90-minute denouement, Bobby received a heart transplant. But still weak and suffering from internal infection as he prepared to leave the hospital, he was detained by his doctor for more tests. Infection then spread from his chest to his brain. With his wife, Detective Diane Russell, at his side, Simone passed away moments before the screen faded — not to black, but to celestial white — for the show’s final credits.

Rookie of the Year 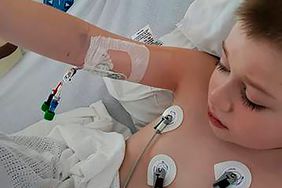 Mom of 9-Year-Old Boy with Coronavirus-Related Illness Warns Parents: 'It's a Scary Thing'