An Ivy League music professor whose taste runs more to Gregorian chants than rock ‘n’ roll claims a Smashing Pumpkins concert damaged his hearing. Peter Jeffery, a Princeton University music historian, alleges he has hearing loss in his left ear and ringing in both ears as a result of the concert, the New Haven (CT) Register reported this week. Jeffery says the Jan. 25, 1997 performance at New Haven Coliseum was his first time at a live rock concert. He says he went with his young son. The earplugs Jeffery wore did not protect him from the excessive noise, according to his lawsuit against the band, the city and coliseum. He contends the music exceeded a safe decibel level that the defendants “knew or should have known” about. The lawsuit seeks $15,000 in damages. It also names as defendants Smashing Pumpkins members Billy Corgan, James Iha, and D’Arcy Wretzky-Brown, and Virgin Records.

After Live Aid and Farm Aid, Hearing Aid May Be Next for Unwary Victims of Rock 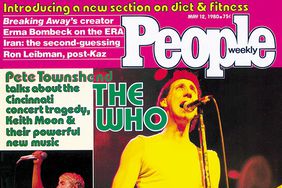 The Who Moves On

Lay Off of Them Blue Suede Shoes