Sharon and Ozzy Osbourne just can’t keep their hands off of each other.

The llovebirdswere spotted on Monday at the Pride of Britain Awards in London, where they shared a passionate kiss on the red carpet.

Photos of the outing showed the Osbournes holding hands as they cuddled close and posed for photos — when they weren’t busy locking lips, that is.

The sweet outing comes more than a year after the Osbournes reconciled their three-decade long marriage in September 2016. The couple split last May amid reports that Ozzy had an affair with his hairstylist, Michelle Pugh.

The Black Sabbath rocker recently opened up about his past infidelities in an interview with Rolling Stone.

“It’s a rock & roll thing – you rock and you roll. You take the good with the bad,” he told the publication. “When I was a crazy f—er-, I’m lucky she didn’t walk out. … I’m not proud of all that s—. I upset my wife and I upset my family and I made a lot of shock and shame. I love my wife, and it made me realize what a f—ng idiot I’ve been.”

Sharon Osbourne Reveals Ozzy Cheated on Her With Six Women: ‘He Had Women in Different Countries’

In July 2016, Sharon publicly forgave her husband during an episode of her CBS daytime show, The Talk, telling viewers that the couple was working on reconciling their marriage.

They renewed their vows months later in Las Vegas on Mother’s Day.

Ozzy spoke of his love for Sharon in the revealing interview, and credited forgiveness for keeping the couple together.

“There’s no other woman I really want to spend the rest of my life with. You make a mistake and you learn by it. She’s made a few mistakes, and so have I,” he said.

Ozzy Osbourne Opens About Cheating on Wife Sharon and Jokes: 'Don't Get Caught With Your Mistress' 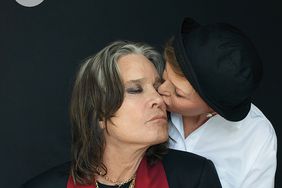 Ozzy Osbourne Says He Regrets Cheating on Wife Sharon in 2016: 'I Broke Her Heart'