See Kaley Cuoco's Chic Wedding Invitation – with No Mention of the Wedding!

What do you get when you combine a chic New Year’s Eve party with a fire-and-ice-themed wedding? One stunning invite.

The Big Bang Theory star Kaley Cuoco rang in 2014 by marrying beau Ryan Sweeting at the Hummingbird Nest Ranch in Santa Susana, Calif., and PEOPLE has an exclusive look at the invitation and save-the-date cards that were sent out.

The printed items were designed by Copper Willow Paper Studio, and co-owner Leora Mauck tells PEOPLE that Cuoco “gave us free reign over the design with a few parameters: make it chic, bold and pink!”

The sleek invitation was intended to mirror the “understated aesthetic of the event,” says Mauck, with a color palette of black, silver and accents of what Mauck calls “Cuoco pink.” (Another example of “Cuoco pink?” Her Vera Wang strapless tulle wedding gown.)

But there is one key detail missing from the invite: any explicit mention of the groom. That’s because “the event was initially conceived as a New Year’s Eve party only,” according to Mauck.

Although the invite keeps the wedding hush-hush, there are some hints: It includes round labels with overlapping “K” and “R” initials, and it does instruct guests to come “dressed to the nines.”

All that added up to an extra-special evening for the couple: Cuoco called the bash the “greatest night of my entire life.” 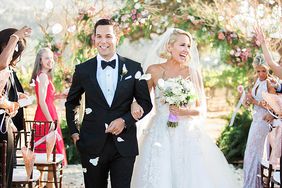 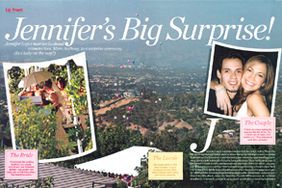