Forget calorie counting! Check out the decadent dishes Lauren Conrad, Gabrielle Union and more are craving for the holidays

The Hills star skips gourmet side dishes and goes for a kitschy fave. "It's the cranberry [sauce] that comes in the can, and literally slides out in the shape of a can. It's like jelly," says Conrad. "[My mother] wants to make the homemade stuff, but I just want my jelly! It's like eating candy."

The key to making the perfect holiday pie? "I can't say it

"I'm a big fan of the pumpkin pie, even at Christmas time," says How I Met Your Mother's resident wisecracker, who shudders at the thought of store-bought pie. "Store-bought?! How dare you, sir! Homemade, all of it – as long as it's six ingredients or less."

The Zack and Miri star carries on a family tradition: dates stuffed with cream cheese and rolled in sugar. "My mom made them at first," she says, "and now I make them.”

"It’s very easy to make, but it’s delicious!" says the Mad Men actress of her favorite dish from childhood.

"I'm a big Christmas cookie person," admits the Grey's Anatomy star of her holiday vice. But her favorite treats, she says, are "my mom's Christmas cookies! She does these German cookies that are amazing."

"I love making fruitcake. It's a recipe from my mother [that] takes hours and hours and hours," says the Desperate Housewife. "The fruitcakes are basically like lead. They're like doorstoppers. Then you pour rum all over them!"

"Stuffing, hands down! It's my favorite!" says the Hairspray heroine. "My mom has the best family recipe. It's a secret, but everyone's invited to my house because once you have my mom's stuffing you'll never have anyone else's."

There's only one thing on the 30 Rock funnyman's mind during the holidays: "Turkey, baby, turkey!" he says. And all side dishes had better be homemade. "All family recipes," he says. "Potato salad, collard greens, mashed potatoes, cranberries. How else would you do it?"

The newest Hero looks forward to the veggie side dishes. "I'm a big fan of the green beans," says Bell. "I grew up in Detroit, so, it's kind of trashy, but they'll do mushroom soup, and green beans with little Funyuns on the top."

"Apple crisp [is] my specialty," says the Desperate Housewives star. "Everyone knows that, at Thanksgiving, Andrea makes the apple crisp. The crumble on top is my favorite part. The trick is extra butter. It makes the brown sugar stick together." And forget about that diet: "If you're gonna go for it, go for it!" Bowen says.

The actress prepares a fully vegan holiday meal – right down to the dessert! "I love making pecan pie. Everything is vegan as long as you use Earth Balance butter and Vegenaise. Vegenaise is the best thing in the world instead of

The Hills star keeps it simple: "I'll just eat the turkey with ketchup," she says. 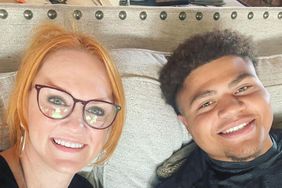