The couple "were married [Saturday] evening, celebrating with 300 family and friends in a romantic, magical setting," his rep tells PEOPLE

Sean Parker has tied the knot with fiancée Alexandra Lenas, his rep confirms to PEOPLE.

The couple “were married [Saturday] evening, celebrating with 300 family and friends in a romantic, magical setting,” the rep tells PEOPLE.

Officiated by Rev. John A. Buehrens, the wedding took place at The Ventana Inn in Big Sur, Calif. Lenas wore a gown by Elie Saab, while Parker, 33, the couple’s infant daughter Winter Victoria and the guests were dressed by Academy Award-winning costume designer Ngila Dickson.

Assisting with the nuptials were designer Ken Fulk, caterer Paula LeDuc and designer Preston Bailey, who did the flowers. Photographs were snapped by Mark Seliger.

Guests enjoyed cake from Perfect Endings as well as music by Loreena McKennitt and The Good The Bad and The Ginger.

The event was rumored to be one of Silicon Valley’s most expensive weddings, reportedly costing $9 million.

Parker – who made billions from Napster and Facebook and was portrayed by Justin Timberlake in the film The Social Network – is said to have staged his nuptials on a spot resembling a Hollywood set, complete with fake waterfalls, bridges and ruins.

Speculation that those attending the ceremony would resemble medieval characters were put to rest before the gathering when Parker Tweeted: “Sorry to disappoint, but the wardrobe we re giving guests is essentially modern. No swords or chain mail. … This is not a ‘theme’ wedding.”

Nevertheless, a team of landscapers and builders worked for weeks on the grounds of the Ventana Inn, creating backdrops including ponds, a gated cottage and a $600,000 stone gate. The couple’s temporary dance floor reportedly cost $350,000 and the bill for flowers and plants is said to total $1 million.

Parker and the singer/songwriter Lenas have been engaged for two years. 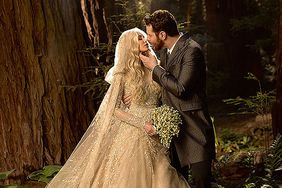 Baby Boy on the Way for Sean Parker