Peek at some of the Island star's most fashionable looks, as selected by PEOPLE style expert Danielle Dubin. By Serena Kappes

At the Cannes Film Festival in May, Johansson opted for a pleated Imitation of Christ Couture dress. "It's a very flirty skirt, which she pairs with a demure heel and a ladylike clutch," says PEOPLE StyleWatch writer Danielle Dubin.

"This is truest to Scarlett's real sense of fashion, which is very edgy and dark," says Dubin of the actress's velvet pantsuit at an event in Pasadena, Calif., early this year. "The very skinny pant leg is popular in jeans now as well as formal wear."

"I wanted to go Old Hollywood," Johansson told PEOPLE about the Roland Mouret gown she wore to January's Golden Globes. Completing the retro look: "Veronica Lake hair, arched eyebrows and dramatic red lips," says Dubin. "She always accentuates her lips. She knows they're one of her most striking features."

Johansson (from left: at MTV's TRL in July; at Cannes in May; in Beverly Hills in May) works a variety of denim styles. "A lot of actresses find one pair of jeans they look great in and stick to it," says Dubin. "She is as bold and varied in her jeans choices as she is in her red carpet looks."

Outside L.A. in June, Johansson had a boho moment in a tie-dyed peasant skirt, tight-fitting tee and cardigan. "Even when she's dressed down, you never see her in big, baggy clothing," says Dubin.

"She has the gift of being able to dress older without dressing dowdy," says Dubin of the 20-year-old actress, in gold Narciso Rodriguez at the New York City premiere of The Island in July. One secret: simple accessories. "She keeps it very spare and elegant."

The New York City native (in her hometown in July) tells PEOPLE that being from the Big Apple "inspires me to be different and creative" with style. "She's very slick and sleek," says Dubin. "This is Scarlett doing relaxed, mellow cool."

PRINCESS FOR A DAY

In Roland Mouret at the Academy Awards in March, Johansson told PEOPLE she wanted to channel "a modern version of Audrey Hepburn in Breakfast at Tiffany's." And her $55,000 tiara with three antique Fred Leighton brooches made her feel like a "princess."

Her blazer-and-chinos ensemble in New York City in May "is uncharacteristic for Scarlett," says Dubin. "It's almost bookish by her standards. But it still works." Johansson admits to PEOPLE that she often wears a ponytail in her off-hours "because that's all I know how to do."

"There are plenty of girls that do sexy, but only Scarlett gives old Liz Taylor and Marilyn-ness," the actress's stylist, Annabel Tollman, tells PEOPLE. At a party in Hollywood in June, Johansson showcased her va-va-voom figure in a halter-necked Missoni. 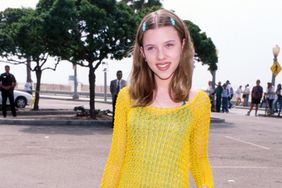 Scarlett Johansson: Inside Her Life