Scarlett Johansson Finds It Easier Being with Someone Not Famous

"We don't have our crazy conflicting schedules," Johansson says of fiancé Romain Dauriac

After plenty of high-profile relationships, Scarlett Johansson says she finds it refreshing being with her fiancé Romain Dauriac, a French journalist.

“It is [easier], but it’s more than that,” Johansson, 29, tells Vanity Fair for its May issue. “We do different things. He’s into the whole art-scene world. So it’s nice, because we can enjoy each other’s worlds, but we don’t have our crazy conflicting schedules and all that other stuff to contend with.”

Johansson has been romantically linked to several stars, including Jared Leto, Sean Penn and Josh Hartnett, and was married to Ryan Reynolds for two years before their 2010 split.

Another perk of dating a non-celeb? “You know, of course, actors, in general, they’re obsessed with emotions,” Johansson said. “Although, [Romain is] French, so he’s also probably overly into his emotions.”

The actress – currently starring as the Black Widow in Captain America: The Winter Soldier – is expecting her first child with Dauriac. The pair have been together since late 2012. 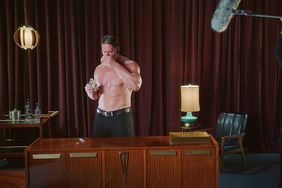