In court papers, Craig Schelske says the singer had an 'intimate relationship with another man'

Sara Evans’s estranged husband, Craig Schelske, alleges that the singer had an affair, according to court papers filed Friday at the Williamson County Chancery Court in Franklin, Tenn.

Schelske claims the day before Evans filed divorce papers, he “discovered Wife’s intimate relationship with another man not her husband and an argument ensued between the parties.”

Schelske claims that he then consulted with an attorney in order to file for legal separation, but was instead surprised by his wife’s filing for divorce.

Schelske also alleges that Evans had “a breakdown” last year. “Husband has been continually supportive of Wife since her apparent nervous breakdown in 2005 and has encouraged wife to seek professional help and monitored medication.”

In response to the Schelske’s filing, John Hollins Sr., the attorney for Evans said only: “We rely on what’s alleged in our sworn pleadings.”

In a statement released shortly after the papers were filed, Schelske’s spokesman said, “Today Mr. Schelske has formally responded to the allegations of Ms. Evans’ Petition for Divorce with several court filings. He has demanded retractions of those allegations, an apology and that the further spreading of false information be stopped immediately.”

In addition he added, “Believing that they have no adequate factual basis for the outrageous claims, he has requested that sanctions be imposed under law and that the allegations be stricken from the record.”

Ever since Evans, 35, filed for divorce on Oct. 12, Schelske has maintained that he would defend himself against her accusations. “I cannot explain why Sara is waging a false media campaign, but I intend to defend myself in court and protect my children as best I can,” he said in a statement released Monday.

In her original divorce papers, Evans cited adultery – as well as irreconcilable differences – as the grounds for divorce. In the filing, she accused Schelske of having an affair with her friend and former nanny to her children, Alison Clinton, and alleged that he was verbally abusive, drank and smoked in front of her children and watched pornography in their home.

Both Clinton and Schelske have denied the allegations against them.

In a pretaped interview on Dancing With the Stars Tuesday, Evans said only that “something happened” that caused her to end her marriage. “It’s very personal. It’s very traumatic and it was very hard for my children,” she said. “Things drastically went downhill 100 miles an hour.”

Evans also initially sought a restraining order, which was granted on Oct. 16 that prohibits Schelske from withdrawing money from their joint accounts. Evans’ lawyer, John Hollins St., filed an amended divorce complaint alleging that Schelske transferred $275,000 from the couple’s joint personal and business accounts into an account with his name only on Oct. 12 – the same day Evans filed for divorce. 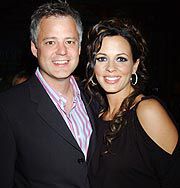 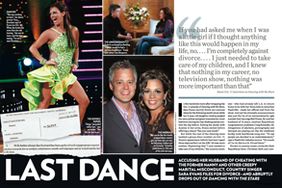