Since her marriage crisis began Sandra Bullock has remained in seclusion while raising her new son, Louis.

That will all change next month.

On Wednesday she was named the recipient of the MTV Generation Award “for her riveting and diverse contributions to the film industry,” and her rep confirms, “she will be attending” the June 6 MTV Movie Awards in Universal City, Calif., though she won’t be doing any interviews at the ceremony.

Cruise and Cameron Diaz are among the first presenters passing out the popcorn statues, along with Robert Pattinson, Kristen Stewart, Chris Rock, Zac Efron and Jessica Biel. Christina Aguilera and Katy Perry are set to perform. 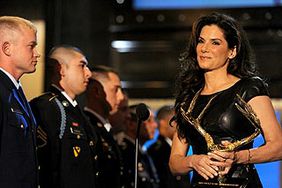