"We believe in equality for all," Heineken said

But the iconic brand has withdrawn its sponsorship from Boston’s parade – as has Heineken in New York – because gay and lesbian groups aren’t allowed to march openly.

Sam Adams said in a statement that it had been in dialogue with Boston’s parade organizers about a change in the rules.

“We were hopeful an agreement could be reached to allow everyone, regardless of orientation, to participate in this parade,” the company said. “However, given the current status of the negotiations, this may not be possible.”

The Boston parade’s organizers, the South Boston Allied War Veterans Council, said in a statement of their own that LGBT individuals could march in the parade, but that they couldn’t identify themselves with signs or t-shirts.

“We invite all to join us to celebrate this historic event, but we must maintain our guidelines,” the group said.

Heineken’s statement about pulling their N.Y.C. sponsorship was simple: “We believe in equality for all,” a spokeswoman told CNN Money.

“As mayor of the city of Boston, I have to do my best to ensure that all Bostonians are free to participate fully in the civic life of our city,” Mayor Walsh said in a statement. “Unfortunately, this year, the parties were not able to come to an understanding that would have made that possible.” 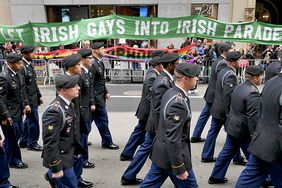 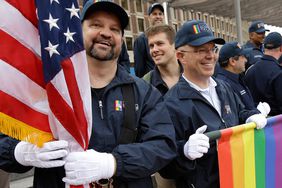