Ryan Seacrest traded in his TV and radio hosting duties for another important task on Saturday: serving as the Man of Honor in his sister’s wedding!

“The day your sis grows up…man of honor bride workout first stop,” Ryan, 41, first shared in an Instagram post early Saturday morning about standing beside his younger sister Meredith on her special day.

“Today’s the day… excited for my sis! Proud to be her man of honor,” he tweeted shortly after.

In a small ceremony in Mexico with their closest friends and family, Meredith, who serves as the executive director and COO at the Ryan Seacrest Foundation, married her husband Jimmy Leach, a senior executive at TOMS.

For the intimate celebration, which was planned by Stefanie Cove of Oren Cove Event Production, Meredith donned a Vera Wang dress while the groomsmen wore Ryan Seacrest Distinction collection suits and accessories. And what better shoes to wear for the special occasion than TOMS? When it came to footwear, all members of the wedding party sported the “One for One” company on their feet.

Leading up to the Mexico-set wedding, Ryan shared his excitement for his MOH duties in a series of tweets.

On Thursday, Ryan shared a photo of himself standing alongside Meredith after the duo picked up her Vera Wang dress. “Mere’s got the dress, can’t wait for her big day Saturday!” he captioned the sweet snap shared on Twitter. “#FinallyFriday and finally time for man of honor duties @ Mere’s wedding! Can’t wait,” he posted Friday.

Last October, the executive producer revealed that his sister asked him to serve in the honorary role in her wedding. “You’ve been by my side all of my life, and I wouldn’t want you anywhere else, when I become a wife,” Meredith’s poem to Ryan read. “I’m so lucky to have you as my brother, and couldn’t imagine celebrating with any other. So basically what I’m trying to say… Will you be my Man of Honor on my special day?!” 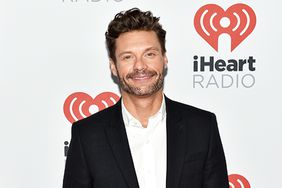 Ryan Seacrest Asked to Be Man of Honor at Sister's Wedding: 'Just Shed a Tear'