A contrite Russell Crowe admitted he has an anger-management problem and publicly apologized on Wednesday’s Late Show with David Letterman for throwing a telephone at a hotel concierge early Monday morning.

“This is possibly the most shameful situation I’ve ever gotten myself in in my life, and I’ve done some pretty dumb things in my life,” the Cinderella Man star told Letterman (who greeted Crowe’s entrance by hiding the phone on his hosting desk). “So to actually make a new No. 1 is spectacularly stupid.”

On Monday, Crowe, 41, was arraigned on charges of second-degree assault and fourth-degree criminal possession of a weapon. The police report said he threw a phone at the concierge at downtown Manhattan’s Mercer Hotel, “hitting him in the face and causing a laceration and substantial pain.”

A spokesman for Crowe later said in a statement that a hotel employee was not helpful and had displayed “attitude” as Crowe had sought help in placing a call to Australia where his wife, Danielle Spencer, and their 17-month-old son, Charlie, were.

“I’m, you know, trying to fulfil my basic obligations to my wife who needs to know I’m at home, I’m in bed, I haven’t had too much to drink, and that, you know, primarily important, that I’m alone,” Crowe told Letterman.

On the Late Show, Crowe also apologized to the hotel employee, Nestor Estrada. “Hopefully at some stage, I’ll be able to apologize directly to Nestor but at the moment, he’s not answering his phone,” Crowe said. (New York’s Daily News, in its Thursday editions, has photos of Estrada, whose right cheek displays a gash. The Brooklyn man, 28, is said to be consulting with his lawyer.)

Explaining that he was jetlagged and missing his family, Crowe owned up to his temper problem, but added: “At the same time, I also have, in the moment, infinite patience, you know? We had nine rooms in that hotel over a period of seven days and everybody was having the same problems.”

Still, Crowe said, his wife impressed upon him what a mistake he had made. “There’s not many things that scare me in this world,” said Crowe, “but I’m absolutely terrified of disappointing her.”

The assault charge is punishable by seven years in prison. Crowe – who was released without bail – is due back in court Sept. 14. 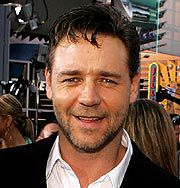 Russell's Wife: No Excuse for His Behavior

WEEK AHEAD: Angelina Travels to Africa

They Said What? for June 14 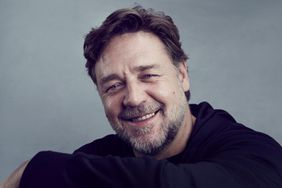