Jerry Hall shared a family photo from her early March wedding to Rupert Murdoch on Twitter Monday, showing off their expanded brood in a posed portrait.

The couple was married in a private civil ceremony at Spencer House in London on March 4. The couple then celebrated the union at St. Bride’s Church on the city’s Fleet Street, to which Hall, 59, wore an ice blue wedding gown, matching with her daughters and new step-daughters.

Hall’s four kids are from her relationship with Rolling Stone Mick Jagger, while Murdoch’s come from previous marriages and relationships. The entire group of 10 – and some of their respective spouses – made up the wedding party.

Announcing their engagement in January, the pair wasted no time planning a wedding. Rev. Canon Dr. Alison Joyce, who lead the hour-long service, told PEOPLE ahead of the big day that it was “very much a family event for both of them.” 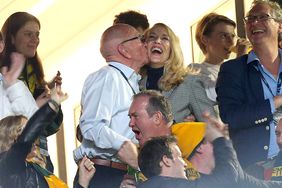